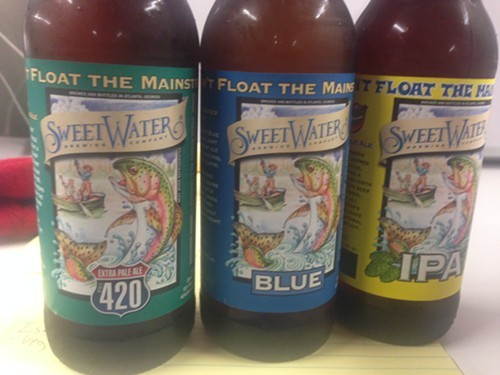 This week marked the big, Memphis debut of the much-loved beer from Atlanta-based Sweetwater Brewing Co.

The debut is big news for hard-core beer lovers and causal fans alike. The beer has a near-iconic status, especially in the Southeast. It’s delicious, balanced, and you can drink it all dang day long. And the company’s got enough flavors for just about anyone.

Here’s what the company said about the debut on it’s web site:
“Good news Memphibians — we’re finally makin’ it to your neck of the woods. We realize we may have skipped over you a little bit, but we’re makin’ up for it by coming in hard and fast starting June 16. We’ll roll in with 420, IPA and Blue, plus our summer variety Tackle Box that includes 420/IPA with Waterkeeper Hefeweizen and our all new Take Two Pils, a spicy blond lager.”

Rivers of Sweetwater will flow from beer taps this weekend if its weekday debut is any indication. The company’s tie-dyed banners could be seen on bars all over Midtown this week. Slider Inn was packed Wednesday night and it seemed the promise of some of that much-coveted Sweetwater beer did much to bring out the crowds on a school night.

Sweetwater was available in Birmingham when Memphis Flyer music editor Joe Boone lived there and he said he “very familiar" with the product:

“Regrettably, I did live in Alabama. While there, the American craft-beer revolution hit the Southeast. Sweetwater 420 showed up at my local wing joint and thus began a love affair that lasted until I moved home. Back in Memphis, I fell in love with Ghost River and eventually dove into what's become a local-beer key party with a line down the street. Memphis should be proud to be drunk and in bed with Ghost River, Wiseacre, Memphis Made. But it's ok to spice it all up with some foreign action. There's not much to love about Atlanta, but I'll post relationship status with Sweetwater 420.”

I make a point to grab a Sweetwater anytime I’m in Atlanta or an Abita in Louisiana or a Yazoo in Nashville. And I always grab a Busch (right from a rushing mountain stream) when I’m in “the Rockies.” (I’ve never been to “the Rockies.”)

Drinking local beer is fun for me. But when it comes to Sweetwater, it’s also always been a bit of medicine. Airports are not my happy place. That notion puts the Atlanta airport on some very low rung of Hades. But there, close to the Delta gate for my typical Memphis flight, is the lovely, homey Sweetwater airport bar. Good to know now that I can get some of that good stuff on both sides of the trip.

Sweetwater is available at bars all over town. Find one here.