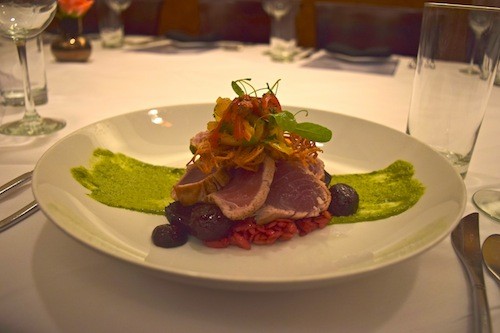 Food pics are a dime a dozen, and at this point we’re pretty jaded. What’s that, you say? A photo of a life-changing yellow pukka curry from celebrity chef Jamie Oliver? Yawn. Yet another garden-fresh watermelon salad from Real Simple editor Sarah Copeland? Wake me when it’s over.

But once in a while, a food pic comes along that really gets our attention. That’s what happened on Wednesday night, when Interim Restaurant and Bar posted this photo on their Facebook feed. It shows a forthcoming menu item, the house-cured gravlax on German rye bread ($12). 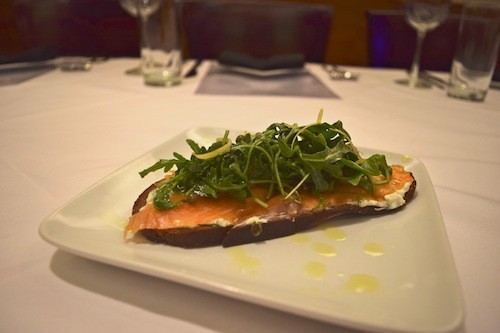 Gravlax is a Scandinavian dish that consists of salmon that has been dry-cured with a mixture of salt, sugar, and fresh herbs. At Interim, they serve it over arugula, with crème fraiche and capers. It’s a thrilling flavor combination, and the salmon is so good that they could have served it by itself, alone on a plate. If you order the gravlax, be sure to nibble on a bit of the fish without the fixins. Yum.

But what really stood out was the seafood special: seared ahi tuna with peach and arugula slaw on a bed of beet orzo (market price, usually about $30). Chef Jason Dallas, formerly of Chez Philippe, developed it together with sous chefs Sepand Mazahery and Ysaac Ramirez.

The orzo is rich and hearty, picking up earthy undertones from the beets. The slaw is sweet and a little spicy. And in between, the fish is just terrific. It’s wild-caught, sushi-grade tuna from the Gulf of Mexico, and it tastes like it just came out of the water.

And as a matter of fact, did just come out of the water. Chef Dallas handed me the tracking tags from Gulf Wild, a Florida company that works with Gulf fishermen to ensure sustainability, accountability, and freshness. By using a tracking number, I was able to determine that the tuna I was eating had been caught earlier in the week by fisherman Robert Carter, aboard his vessel the Blackjack 1.

Now that’s pretty cool. If you’re looking for a good example of what Memphis chefs are capable of, you could do worse than to start here.