A Visit to Schweinehaus, Oktoberfest Sunday 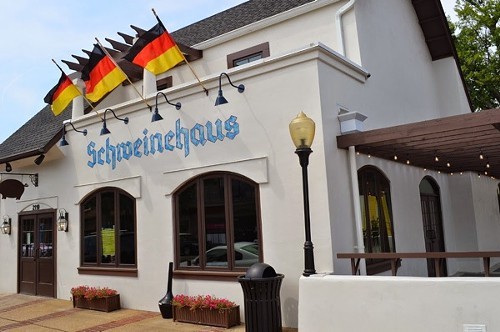 Last week, we went to check out Schweinehaus for lunch. It looks great — the old Paulette's has been cleared out for an open, airy space with white walls and brown accents. Most of the tables are long with bench seating for family-style meal. The design very nearly insists on big gatherings among family and friends. 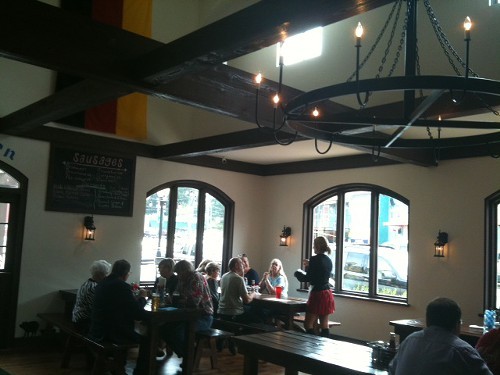 We started with the baked pretzel ($8), because, of course, we did. It was good enough. What stood out most was the beer cheese. We liked it so much we upsized it with an order of beer cheese soup ($4).

We also got the fried brussels appetizer ($7), which involves bacon and a citrus vinaigrette. This dish won over a brussels sprouts hater.

I ordered the Veggie Grillt Kase ($10), a veggie sandwich with tomato, caramelized onion, muenster cheese, and apple jezebel (a slaw with apples and horseradish). I've had plenty of veggie sandwiches but not one like this before. There are a lot of different things going on — salty, sweet, sour.

One of our party got the pulled pork reuben ($11), described on the menu as "kraut Salat, Whole Grain BBQ, Marble Rye." He liked, but I think he was expecting something a little more reuben-y, less pulled pork sandwich.

Another order the bauerwurst, which was on special that day.

You should check it out yourself. Sunday would be particularly fun day to do so. That's Oktoberfest at Schweinehaus, starting at 11 a.m.