At Joe’s Wines & Liquors, they recently installed one of the baddest growler stations in town. Twenty beer taps plus 10 wine taps equals 30 new taps. It's all nitro, which means the beer is colder, smoother, creamier. And if you wanna know what’s on tap, just glance up at one of three 42-inch flatscreens.

Manager Sisco Larson (pictured above) says he got the idea while on vacation in Atlanta.

“I was at Hop City,” remembers Larson, “which has this awesome growler station. And then up above, on the wall, they had this trippy terrapin mural. It’s like half Grateful Dead and half beer.”

That trip, he says, triggered his transformation from “chugging Bud Lite with my fraternity brothers to actually drinking good beer.” But when it came time to create his own growler station, Larson decided to differ from Hop City in one important way:

“They’ve got all these chalkboards above the beer taps,” says Larson, “but I thought, you know, it’s 2015. We don’t have to do chalkboards. We can do something that’s easier to read. We can keep the chalk away from your beer.”


On a recent Tuesday night, Larson pulled a sample of the Ghost River Midnight Magic Lager ($15.99 for growler and growler fill). It was eminently drinkable, toasted and malty, with tiny nitro bubbles that crawled down the side of the glass. (Because Joe’s is a liquor store, they can serve you a sample but can’t sell you a pint.)

I was intrigued by the idea of wine on tap. Why not just do it the old fashioned way?

Turns out that with many more exclusive wines, you can get a keg when you can’t get a bottle.

“Take this Robert Turner Pinot Noir,” says Larson, gesturing to a tap. “He does maybe 500 cases per year, and we can’t get any of his bottled wine. It’s just not available in our region.” 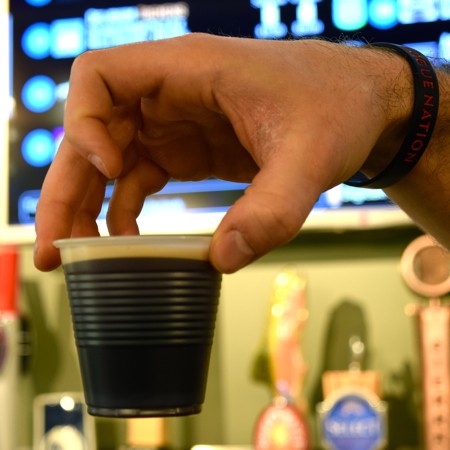