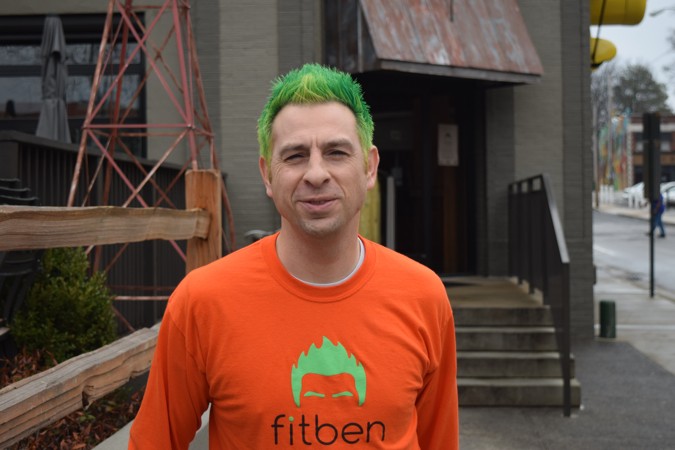 Step into Belly Acres, and you’ll spot something a bit unusual, even for freaky-deaky Midtown: a 38-year-old heterosexual male with bright green hair. What’s even more surprising is that the guy isn’t a customer or a waiter…he’s the owner.

“I like it, but my kids aren’t crazy about it,” admits Belly Acres’ Ben McLean. “They asked me not to get out of the car when I pick them up from school.”

Of course, nobody needs a reason to go green. To be honest, the troll doll look kind of suits him. But in McLean's case, it’s more than just a fashion statement. He’s raising money to help feed hungry seniors.

“When I was a kid,” recalls McLean, “my dad drove Meals on Wheels in the church van. I got to see how it would touch these families' lives, how appreciative they were.”

“MIFA is helping people who really need it,” he adds, “and I always knew I wanted to be a part of that. It just gives them one less thing to worry about, you know?”

It's called FitBen, and here's how it works. During the month of March, McLean is wearing a Garmin Vivofit, which tracks his steps. He’s posting weekly totals and asking people to donate to MIFA based on those numbers.

“It’s March for Meals,” says McLean, “and as a restaurant owner, I march around all day. At any given moment, I’m a waiter, a dishwasher, a cook, or a cashier. So I figured, why not use that as a way to raise awareness and help feed hungry seniors?”

Want to celebrate with McLean? There’s a wrap party at Belly Acres on March 31st. He adds that his shoes and Vivofit were donated by Breakaway Running, and his hair was donated by Dabbles Hair Company.

So here’s my question. The hair is green…why not go all the way? Eyebrows?

“Yeah, I couldn’t do that,” answers McLean. “I had to draw the line somewhere, and I drew it at the eyebrows.”