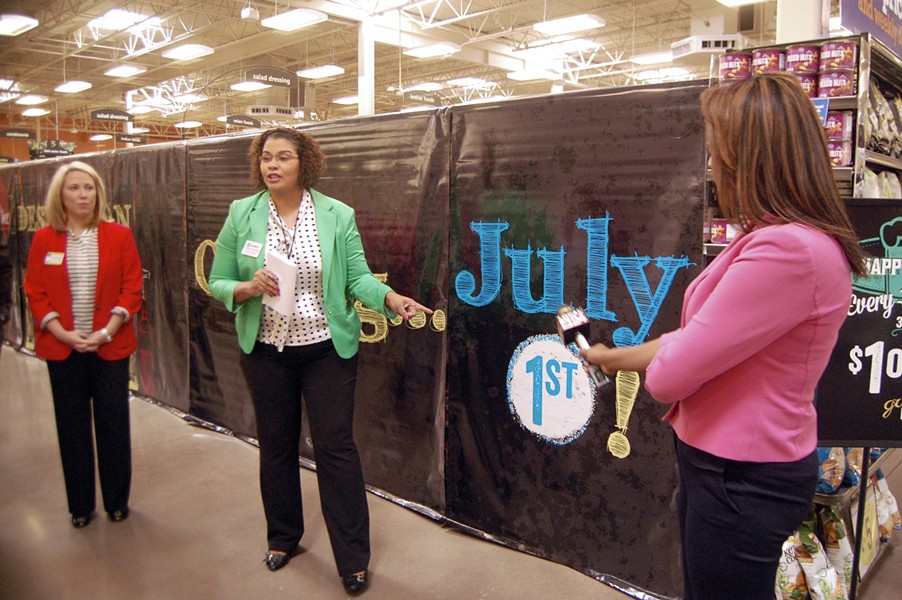 Wine will soon flow in the aisles of many Tennessee grocery stores and on Tuesday Kroger officials showed the media just what that will look like in stores in Memphis.

One long aisle in Kroger’s Germantown store was draped in large vinyl banners that read “Coming…July 1st,” the day wine sales will be legal in some Tennessee grocery stores. That aisle was featured prominently by the close to the front door and right in the middle of the Germantown store. It was also set close to the beer aisle, which now features a growler station.

While you couldn’t buy wine at the store yet, of course, you could buy wine bottle openers, wine glasses, and sundry other bar accouterments. But Kroger officials gave a tour of the store that would show what the public can expect when they will, in fact, be able to buy bottles there.

Stops along the tour included the meat department, the Murray’s Cheese shop, the dessert section, and the floral department. At the tour stops, wine distributors said that they will work with Kroger stores to help them
with seasonal selections and showed off some of the wines that will be available.

Prices from the various vendors varied, of course, though the different ranges included everything from a (possibly) $3.99 bottle up to high-end wines in the $80-$90 range. But all distributors said they would work with customers and get them anything they asked for, including Cristal champagne which can costs in the hundreds of dollars per bottle.