May 12, 2016
comment
It’s that time of year again when the skies of Memphis take on a similar look to that of L.A., but instead of smog generated from an overpopulation of single-occupancy vehicles filling the atmosphere, an inundation of smokers, pits, and cookers cover the Memphis skyline in a haze of heavenly swine-scented smoke.
Two books just hit the shelves, and the matrix, Tuesday, and they offer a couple of ways you can contribute to the seasonal pork-infused smog, either by way of cooking cob roller yourself or by educating dilettantes on original authentic barbecuing. 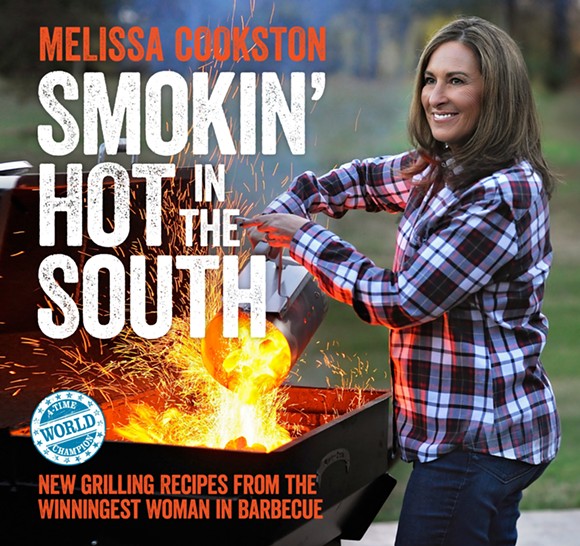 As if winning multiple world barbecue cooking championships, opening several successful barbecue restaurants, and publishing her own cookbook weren’t enough, pitmaster Melissa Cookston is at it again, this time with a new cookbook. Smokin’ Hot in the South (Andrews McMeel Publishing, $22.99) serves as a collection of grilling recipes that takes traditional Southern ingredients and recipes and approaches them from a new angle.

“I’ve taken simple Southern ingredients and kicked it up a notch so that they are used in unique ways,” Cookston says. “For most people, the kitchen is their comfort zone. I like to take cooking outside. That’s what it’s all about.”

Before there were divisions and categories and sections and parts, and before there were options such as gas and electricity, there was wood and coal and a 200-pound hog and a man (and probably a woman, too). And with those minimal elements came stories and scars and hazards and a culture, and Louisiana native Rien Fertel fell in love with all of it.

Fertel recently released The One True Barbecue: Fire, Smoke, and the Pitmasters Who Cook the Whole Hog (Touchstone, $25), a hybrid travelogue, history, and homage to the disappearing culture of pitmasters who cook whole hogs over wood-fired coals.

“I fell in love with and romanticized what they did, and I became obsessed with the barbecue that they made,” Fertel, of New Orleans, says. “The book is about the process and the food, but really it’s about the people who stick with the tradition and stubbornly adhere to a culinary art form that doesn’t really make sense.”

There are stories of scarred arms from grease splatters, exploding pigs from a combination of grease hitting the fire in just the right way, and the fact that there are only 10 traditional whole-hog pitmasters left in the U.S., including the two children of Ricky Parker who run their father’s barbecue restaurant, Scott’s Parker’s BBQ in Lexington, Tennessee.

Fertel will appear at the Booksellers at Laurelwood Sunday, May 15th at 2 p.m. for a book signing.

Smokin’ Hot in the South Melissa Cookston Rien Fertel The One True Barbecue: Fire Smoke and the Pitmasters Who Cook the Whole Hog