Something cool is happening downtown 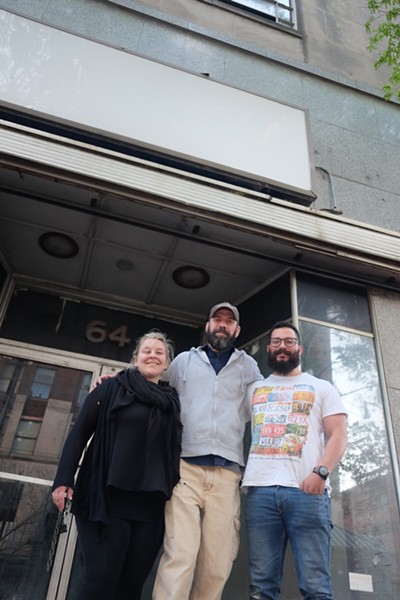 Gabe Velasquez and Amanda and David Krog have joined forces to transform a 11,145-square-foot, two-story building at 64 South Main into a “one stop shop for people contributing to Memphis’s growth,” Velasquez said.


It will include a boutique health and wellness center, which will feature a restaurant serving healthy food owned by Amanda Krog. A penthouse restaurant owned by chef David Krog is slated to open in a year. The building also will include space for other occupants.

Velasquez, who owns the building, said the health and fitness center will include a nutritionist, physiologist, certified dietician, gym, classes and other services geared toward active professionals.

The health food restaurant, which is slated to be called “Counter 64” and will serve salads, sandwiches, and other items “with the emphasis on local and healthy,” Amanda said. “I want to focus on eating from all the five food groups like we’re supposed to. It will be healthy fast food. Even if it’s blended in a smoothie.”

Each floor will feature works by local artists.


The public will be able to take a first peek at the first floor of the building at the inaugural “Gallery” art show and dinner, which will be held April 28th. The art shows/pop-up dinners, which will be held weekly for the next six to eight months, will feature local artists and multi-course meals with wines prepared by David, former executive chef at Interim restaurant who has worked with chefs, including Erling Jensen. He also opened the old Madidi restaurant, which was owned by actor Morgan Freeman.


During the art show/dinners, guests will dine on 12-foot-by-42-inch tables made of wood taken from the walls of the almost 80-year-old building, which housed a distribution plant for a pharmaceutical company in the 1940s.


Velasquez’s idea for buying and transforming the building was a way for his family “to contribute to Memphis’s growth.” His dad, Dr. Pedro Velasquez, an endocrinologist, owns a clinic and does research in Memphis. “My dad and my brothers are all in this. This is ours. Not just me.”


His family moved to Memphis from Venezuela in 1997 so Gabe’s younger brother, Pedro Velasquez Jr., could go to St. Jude Children’s Research Hospital. Velasquez Jr., a cancer survivor, now owns a management company and is dedicated to health care reform.


Gabe, who now operates a pharmacy, and David got to be friends at Interim, where Gabe used to eat three times a week. “We became friends from food,” David said.


Gabe bought the building at 64 South Main because he “saw definite growth” in the downtown area. “The energy is just magnetic on South Main,” he said.


He also noticed all the health-minded people living and working downtown, so he thought a health center, would be perfect.


Gabe invited David to do pop-up dinners at 64 South Main after he heard David quit Interim and was considering opening a restaurant with Amanda in East Memphis. David felt he could continue to “keep his brand going” at the new space.


“When he quit his job we knew we were going to do something together,” Amanda said.


The 20-seat restaurant with no menu will be a “chef’s counter restaurant,” David said. “No tables. Everyone sitting at the counter, which surrounds the kitchen literally four-feet away from us. Chefs behind the counter will be serving you.”


As for the food, David said, “We are hyper local. The farmers seek me and I seek them.”

The top floor will include an atrium and a glass enclosed wine cellar. Cigars also will be offered at the restaurant.


In addition to the pop-up dinners at the art shows, David will continue to prepare food at fundraisers and at private homes.


His “Farm Feast,” which was postponed April 14th, will take place June 2nd at Rose Creek Farm in Selmer, Tenn.