The moment you’ve been waiting for has arrived — if you’re a Pete & Sam’s lover, like I am. The restaurant re-opens at 4 p.m. May 21st.

The beloved restaurant closed after a fire December 12th. Now — with new plumbing and electrical work and a decor facelift — the restaurant is ready to start serving its signature spaghetti, ravioli, steaks, pizza, Beacon salad, fried chicken (one of Jerry Lawler’s favorites), and other favorites.


Some people, including myself, were afraid the restaurant would reopen with a modern, contemporary look.


“The goal was turn it back into the Pete & Sam’s in the ‘60s,” Michael says. “The classic Italian restaurant feel.”


The restaurant, which still seats 280 people, evokes “the old Italian restaurant you see in a movie,” Sammy says.


They searched to find just the right type of carpeting with a “retro-groovy ‘60s feel,” he says.


Booths now replace the tables that used to line the South wall of the dining room, but they fit in just right. An extra booth was added toward the front after a wall was lengthened when they got rid of the old busing station.


The old gray ceiling now is black, which, as Sammy says, gives more of an intimate feel to the restaurant.


The old chairs and booths remain, but they’re now covered with a vinyl fabric called “Red Rover,” which fits perfectly with the decor.


Redd Kirk Design Studio was the restaurant’s design firm, but it’s almost like Pete & Sam’s fans had a hand in the design. For instance, the old take-out window now has a marble countertop, but the 60-year-old spindles were kept on either side of the window, Michael says. “The hokey spindles on top. Cause they’ve always been there.”


Vintage ceiling light fixtures, which survived two fires, now grace the front dining room. “They’re so good looking, we had to bring them back,” Sammy says.


The old cast iron grapevine wall hangings were repainted and refurbished and now can be seen framing oversized photos of the late Sam Bomarito, who, along with the late Pete Romeo, founded the restaurant in 1948, and Vita Gattuso, Sam’s sister, who regulars remember standing side-by-side with Sam at the cash register.


You might not have noticed it because of the photographs on the wall, but the 1960s acrylic stained “crinkle pattern” panels in red, white, yellow, and orange still are where they were, but more of them have been added. A new bar area, which seats 16 people at the bar and 16 more at tables, has folding doors with more of the acrylic panels. The doors open to the rear dining room. Finding those panels wasn’t easy. “We sourced it out,” Sammy says. “It took six weeks to find it.”


But getting back to that bar. It’s perfect. A utility room was ripped out and a wall taken out to make more room, but the bar still has an intimate feel.


The “Elvis room” still is located where it always was in the rear dining room, but it’s been revamped.


So, what about the food? I tried some lasagna. Excellent. Yes, you can go home again.


Only “a few non-sellers” - were removed from the menu, he says.

And no new items appear on the menu. "We didn't add anything," Michael says.


Your favorite servers who were at the restaurant in December will be back, Michael says. Some new cooks have been added.


One thing that isn’t at Pete & Sam’s anymore is the artificial tree, which was seasonally decorated. “We lost the tree before the fire,” Michael says. “It cracked.”

But, he adds, “We look pretty good without it.”


A photo of a smiling “Mr. Sam” with two pizzas now hangs on the wall where the phone booth once was. 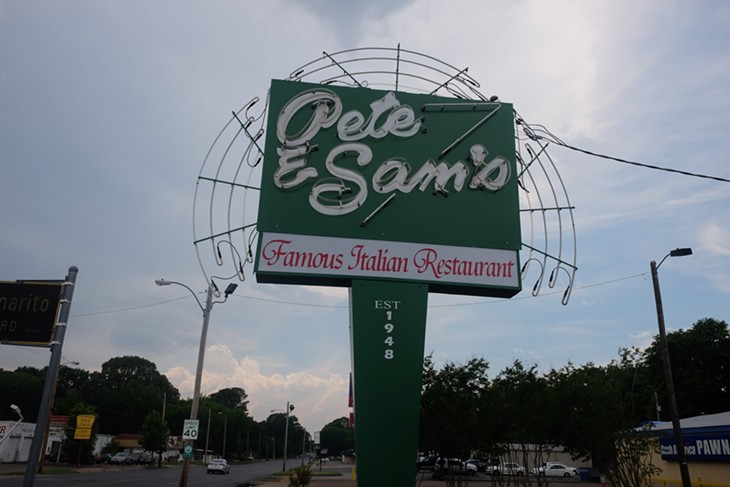