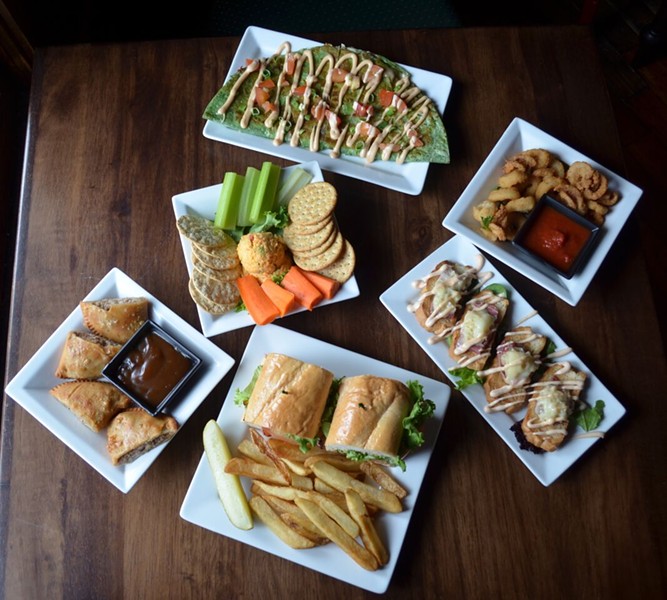 Garrett Quinn's rise at Celtic Crossing begins as many of these stories do with karaoke.

"I was doing karaoke," says Quinn, "when Brandi [Miller] walked in." Bruce was then working the kitchen at Celtic. There was some talking and then Quinn says he went to the restaurant like "a lost dog."

Miller eventually left and the kitchen was his. "I started at the bottom and worked my way up," he says.

Quinn went to culinary school, but feels it's prudent not to mention it. Otherwise, it looks like you're bragging.

But, you could say, with Celtic's new menu and its new flair, there's plenty to brag about.

Quinn says he inched out of the Irish bounds as much as he dared. Like the quesadillas. "I'm trying to be different, eclectic," he says.

And like the gnocchi, an Italian dish if there ever was one. He justifies it by noting that it's traditionally made out of potatoes.

There's also a chicken curry, which is not like a yellow curry but is an English curry. What does that mean? Well, it's less on the turmeric and more like gravy.

Quinn says he's got his eye on the four types of clients Celtic sees. And, he's got nachos for each of them.

1. The morning crowd. They are looking for something quick and easy. For them, he recommends his chicken curry nachos.

2. The lunch crowd. They grab a sandwich and go. The pimento and bacon nachos are perfect for them.

3. The nice dinner crowd. They are the wine drinkers. He'd suggest the Irish nachos with corn beef and the Angry Mary Rose sauce, a spicy take on this traditional mayo/ketchup and Worcester sauce.

4. The late-night crowd. These are the folks for whom nachos were designed. For them, it's the CBCR nachos all the way. That's chicken, bacon, cheddar, and ranch.