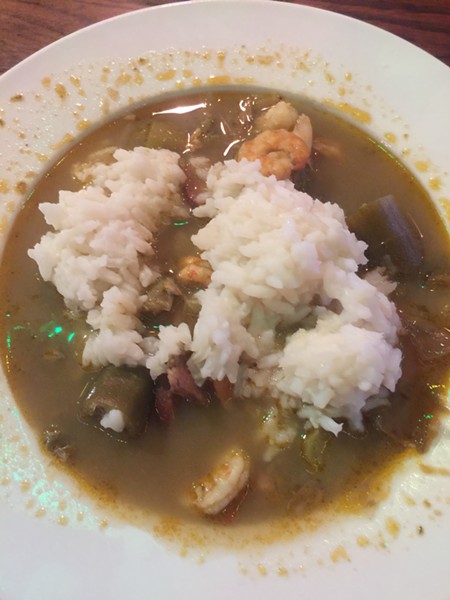 I was in the mood for something hearty, so I ordered a bowl of gumbo at Mortimer’s Restaurant. I’d eaten gumbo there before, but, this time, after I took a bite I verbally exclaimed how great it was. It had a kick to it. I’ve always liked the taste, but this added zip was wonderful.


After I made my announcement, I noticed the people on either side of me suddenly ordered it, too.

I asked owner Christopher Jamieson what was up with the gumbo.


“We’ve been selling gumbo since 1981,” he says. “We’ve built on the same foundation or the same base gumbo, but it’s evolved into what it is now.”


Former kitchen manager Larry Smith “started tinkering with it and re-did it.”


But that’s not where the additional spiciness came from. The gumbo recipe, which is “two pages long," already has “about 40, 50 things in it,” Jamieson says. Assistant kitchen manager Kevin Sykes accidentally substituted an ingredient for another ingredient. Hence the tangy taste.“He was putting crawfish seasoning in it,” Jamieson says. “He thought it was cayenne.”


It was crawfish seasoning or crawfish boil, which, accidentally, was put into the tub where the cayenne was kept. The crawfish boil is “a whole blend of a bunch of different spices,” Jamieson says.


“People have said something’s a little different and I couldn’t figure it out for the longest time ‘cause, with Larry, I wrote down exactly all the measurements and typed it all up for Kevin.”


People kept saying they liked it. And they said, “It’s got more flavor to it.”


“This past season I ordered some extra crawfish boil from my vendor,” Jamieson says.

He served the gumbo at the recent Spirit of SRVS event at the Memphis Hilton.


Jamieson and his wife, Ashley, transported the gumbo in their car. It took him about two weeks to get the smell of gumbo out of their car, he says. “And I didn’t even spill. Just it being in the air getting from my car to the Hilton.”