Alex Castle, head distiller at Old Dominick, does not remember the first time she tried whiskey, but she has a very vivid memory of her first encounter with the stuff.

"My parents, for whatever reason, thought it was a really great idea to take my brother and me to Maker's Mark for a tour," she recalls, "and why it was surprising to me is neither of them drank bourbon at the time."

Castle thought the place smelled gross, that her father putting his hand in the mash was gross, and the bourbon-laced fudge she got at the end of the tour was, yes, gross.

Her feelings on bourbon, to say the least, have softened a little.

The forebears of Old Dominick's founders Chris and Alex Canale used to run a grocery distributorship. At that distributorship they sold flavored whiskey. We're talking prohibition era here. So Old Dominick's Chris and Alex had found a sealed bottle of the bourbon. They decided to unseal it and send it off to get the liquid analyzed, so they could figure out how to make it themselves.

The modern-day version of the toddy features cinnamon, black pepper, cardamom, lemon peel, orange, clove, and grapefruit. It is, what Castle describes as a flavored bourbon.

Castle oversees all aspects of the production at Old Dominick, from the new oak barrels (made from West Tennessee oaks) used for the whiskey to the bottles for the final product. She gathers the raw materials and makes sure all the equipment is in working order. She is, above all, in charge of quality control.

Castle has an astute palate, which has served her well in this job. She says her favorite whiskeys are those with caramel and toffee notes. 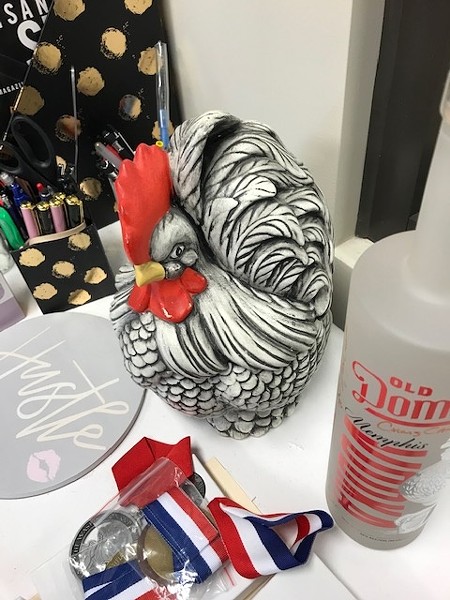 On Castle's desk is an old cookie jar from her childhood days. It's shaped like a black and white rooster with a brilliant red comb. It looks familiar ... just like the dominecker rooster of the Old Dominick logo.

Her parents, the ones who took her on that gross trip to Maker's Mark, took it as a sign. Castle did, too.

Old Dominick will be at Whiskey Warmer, which is happening Friday, March 22nd, from 6 to 9 p.m. at Overton Square. Tickets are $39.