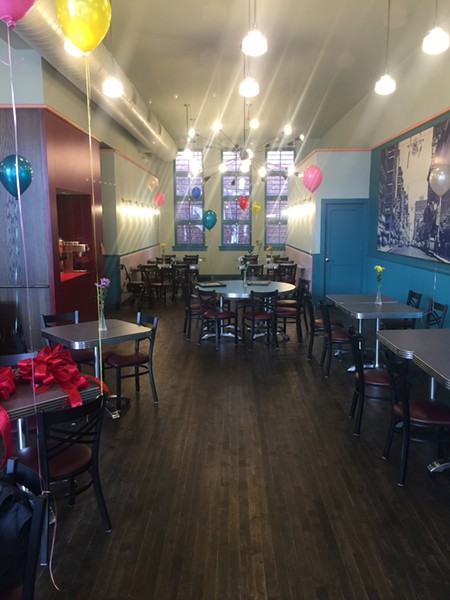 
The Arcade Restaurant will open at 7 a.m. May 2 as an even bigger fun gathering place. The Arcade, founded in 1919 and known as “Memphis’s oldest cafe,” held a preview party on the eve of the expansion’s opening.

“We wanted to show it off to all our friends and family,” says general manager Jeffrey Zepatos. He and his wife, Kelcie, his dad, Harry Zepatos, and mother, Karan Zepatos, along with Michael Zepatos, welcomed about 325 guests for drinks and light appetizers.


Father Nicholas Vieron, 93, who was a friend of Speros and Harry, blessed the new addition, which is an extension of the South side room that adjoins the main dining room. A wall was taken out to combine the two rooms. Back in the day, the side of the new addition closest to the main dining room was the old Progressive liquor store. The other side was an art studio.


The extension, which features a full-service liquor bar and a coffee bar, adds 2,400 renovated square feet to the original ,500 square-foot-restaurant.


Instead of one small bathroom, the Arcade now has four spacious handicapped bathrooms.


A window from the coffee bar to the street saves walking time for outdoor diners.

The new addition includes an indoor waiting area for customers.


The entire restaurant now has a state-of-the-art sound system.


The expansion was done by Looney Ricks Kiss architecture firm and Tom Archer custom builders. Interior design was by Blas Betancourt, who is with LRK, along with Kelsey and Karan Zepatos. Krissy Buck with LRK was project manager.


They found some surprises during renovation. When they took out the linoleum, they discovered a hardwood floor, Karan says.


They left the wood beams that were in the wall. It was as if they were “meant to be,” Jeffrey says.


They removed the brick that went up about five feet on the front windows in the extension and installed larger windows, which gives the room a much brighter look.


For now, the restaurant isn’t open late every night. “Not quite yet,” Jeffrey says.


But business as usual - breakfast, lunch and dinner - will continue at the iconic restaurant, which is celebrating its 100th anniversary.