Why Not Rye for Memorial Day cocktails? Riverset Rye. Made in Memphis. 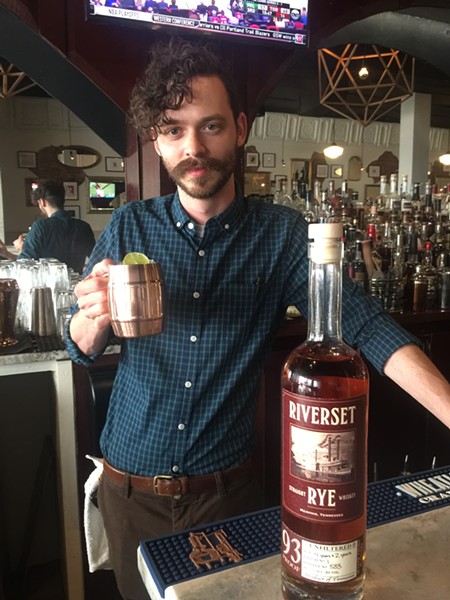 
The Memphis Mule (rye, ginger beer, and lime) and Whiskey Sour (rye, sour mix, and a splash of club soda, with a lemon or lime garnish) are two refreshing spring/summer drinks you can make with the whiskey, says McCauley Williams, president/CEO of Big River Distilling Co. The Memphis company, which began in 2013 with its Blue Note Bourbon, introduced Riverset Rye last October.

“It’s that cinnamon-allspice note,” Williams says. “It also has a minty taste, so in that Mule or in the Whiskey Sour, you get a cinnamon-y minty note that comes through. It’s great with citrus. Riverset Rye and lemonade makes a great summer drink, too.”


Rye whiskey means “it has to be at least 51 percent rye content and grain content. This rye is pretty cool. It’s a blend of two different strains of rye. We blend a 95 percent rye with a 51 percent rye to create our Riverset Rye. That 95 percent is much spicier than the 51 percent. It creates that sweet-and-spicy taste that is typical in allspice or cinnamon, which is what people typically associate with rye whiskey.”


Riverset Rye is "bottled at 93 proof, so it is full bodied and strong."

But, Williams, says, it's "inherently smooth on the finish, which is in large part due to how great our Memphis aquifer water is. It opens up the whiskey and smooths it out."


Rye is not as popular as bourbon, but rye is “having a renaissance,” Williams says. “A comeback. It’s the fastest-growing category of whiskey in the United States by percentage. Because it’s got that bold flavor, it holds up well in the cocktail.”


Williams prefers Bittermilk for the bitters. “It’s a brand they sell at Fresh Market and a lot of liquor stores. They make a barrel-aged old fashioned bitters mix. All you do is take that, add a little water, the whiskey, and garnish with a cherry and orange peel and you’ve got a world-class Old Fashioned.”