Gibson's Donuts at U of M? Not So Fast 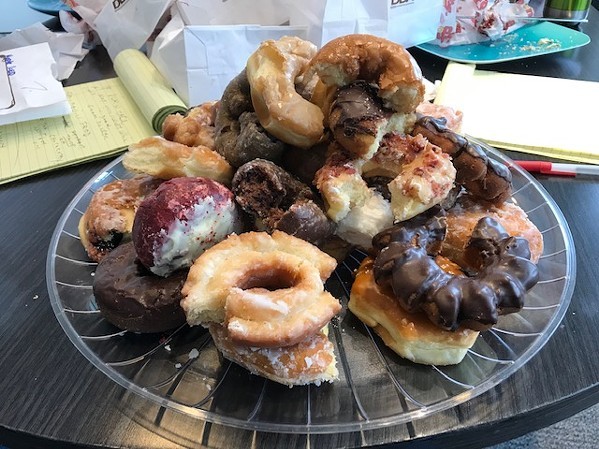 It was all a misunderstanding, says Britton DeWeese of Gibson's Donuts.

"I just thought they were trying to set up an account where they could get donuts regularly and just sign a ticket and get billed once a month," he says. "[The Chartwell rep] never said anything to me about selling them on campus."

Having someone else sell a Gibson donut is never going to happen, according to DeWeese.

The situation got out of hand when U of M president David Rudd tweeted the (fake) news.

If you like Gibson's Donuts. That's good. They'll be on campus next year. Working to be ready at the start of the fall semester. Bringing more Memphis to campus. pic.twitter.com/66DHSmcRPU

DeWeese says his phone blew up. He isn't really hooked into social media, so his friends sent screen shots of the Rudd's tweet.

"So that's how we found out what they wanted to do," he recalls.

DeWeese says Gibson's is not set up for such a venture. And they would never allow it.

He says it just wouldn't work. If the donuts were bought directly from Gibson's that would mean the donuts would be handled twice, which is unappealing, and they would have to be sold for more money. This doesn't make sense to him since the donuts are available relatively close to campus on Mendenhall.

Having someone bake their donuts themselves wouldn't work either, according to DeWeese.

"It's just not that kind of product," he says. "We don't have recipes, we don't have a scale or a measuring cup in the donut shop. Making dough is an art form. It's not like baking cookies. You can't just put a pound of this and a pound of that and come out the same every time because the weather affects the dough."

"We've learned through experience if you want it done right, you've got to do it yourself. And we can't be in two places at once, which is why there will never be two Gibson's. It's not about quantity, it's about quality."

Again, DeWeese characterizes this as a misunderstanding between the parties.

DeWeese says of Rudd's tweet, "It surprised us. I guess he kind of jumped the gun."

Updated: A spokesperson for the U of M says that they are still in negotiations with Gibson's.