When I reach out to Chef Tam Patterson of Chef Tam's Underground Cafe about her notorious Peach Cobbler Nachos, she notes that my timing was good. Just that very day, she introduced a new dessert — apple pie nachos.

When she came to invent the peach cobbler nachos, she thought about her Texas background and about her love of peach cobbler. She decided to combine the two and solve a problem. She said that folks who like the peach cobbler crust would ask for extra crust, leaving her with a pan full of peaches.  She thought if she combined Texans' love for nachos with the peach cobbler, she might have something good. She used cinnamon chips and her peach filling. She says her secret weapon is using pumpkin pie spice in lieu of the cinnamon.

She's been serving her Peach Cobbler Nachos since the Underground Cafe opened in 2016. 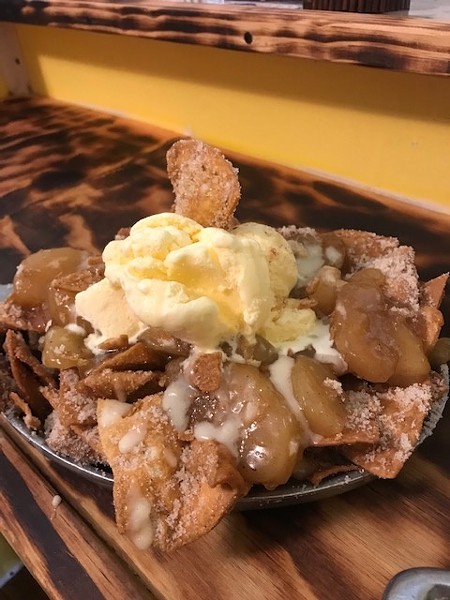 About a month ago, they blew up on the internet.

I first got a glimpse of it on Twitter. For Chef Tam, all of this occurred on Facebook. She says a lady posted an image and claimed it was her idea.

"What am I supposed to say? I mean, imitation is the best form of flattery. And then she's like, I came up with this, and I'm like, babe...," says Patterson.

"I have no idea who she is, but she follows me on social media," Patterson says. She notes that the image that this person used was an Underground Cafe house image used for Black Restaurant Week.

Chef Tam says her phone blew up, and folks reached out to her parents about it. She says her overall response was, if you want them, then come to Chef Tam's

On May 9th, someone with the handle @baddie_bey posted an image, and it blew up on Twitter, with 9.5K retweets and 43.4K likes. But the tweet was news to Patterson.


And that was that. Patterson says she heard from folks about it as far away as California.

Patterson says that she hasn't seen a pick up in business since the Peach Cobbler incident, but it's really hard to tell as the restaurant is always packed. She says that when folks see all the customers, check out her creative menu, and then catch a glimpse of her Peach Cobbler Nachos, they tend to be sold.

Things are going so well that Patterson is opening a second, larger restaurant on Union Downtown in the old Quetzal space, near Sun Studio and across the street from the former Commercial Appeal building.

The current Underground Cafe on Young will become a "tactical" location to service UberEats, Postmates, Door Dash, and the like.

Patterson says the new space is 5,000 square feet. It will have a full bar and a general store to sell her line of spices, T-shirts, and other merchandise.

As for those Apple Pie Nachos, Patterson may have another sensation on her hands. Her post about it on Instagram has more than 700 likes and 67 comments.