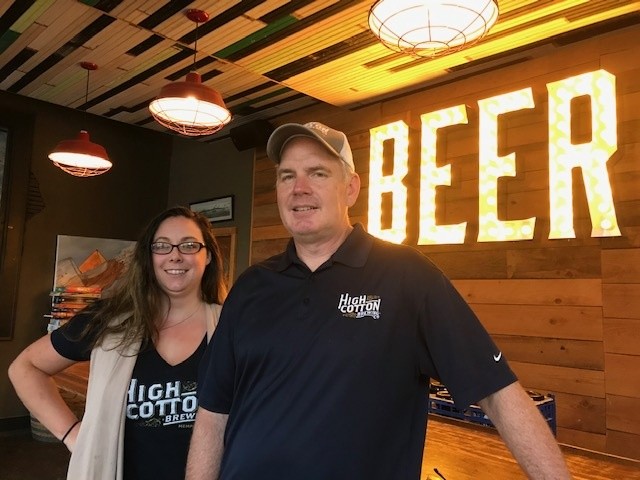 High Cotton Brewing is celebrating its fifth year in its tap room with a week full of events, starting Tuesday, June 11th (tomorrow!).

"Nobody was formally schooled in beer here," says Ross Avery, who owns the brewery with Ryan Staggs, Brice Timmons, and Phil Massey. "But we think what we do is pretty special here. And, in fact, we think it's so special that in our opportunity to expand, we thought it would be better to stay stronger and smaller and local. So, we've just put more money into the neighborhood."

Avery sees the brewery as a neighborhood force. Before they opened on Monroe Downtown, they looked at spaces in Cooper-Young and on Broad.

(It should be noted that High Cotton will snake its way out of Downtown as beer sponsor for the Robert Randolph and Family show at Levitt Shell.)

"The beauty about the tap room and tap rooms in Memphis, in general," Avery says, "is they pretty much created their own culture and run themselves as long as you open the door, sold people beer, and maintain consistent hours."

At the opening of the tap room on June 14th, 2014, the High Cotton folks were expecting maybe 150 people, mostly family and friends. Some 1,000 showed up. They didn't shut down the street, but with everybody milling about, the block was essentially shut down. The police came and apologies were made. One officer said, according to Avery, "No, we're good. Good to see you down here."

One key part to High Cotton's success at the tap room is the partnership with Tim Barker, who runs Edge Alley next door. Avery says that the food trucks booked at the brewery weren't always reliable. The partnership solves this. Plus, Barker caters events in the brewery's back room.

Right now, High Cotton, which sold its first beer seven-and-a-half years ago, is steady-as-she-goes, expanding its brand, getting its beer out to more stores. They are also working on barrel-aging and perfecting its flavors.

One thing that they will introduce this week is the Mug Club — 46 mugs are waiting to be claimed. Four more mugs will be given away as prizes after the beer run on Saturday. The Mug Club is $50 per year, with members getting a 20-ounce pour for the price of a pint.

The week's events include a customer appreciation night, a beer run, and a Dead Soldiers reunion. See full calendar below.

"We love what we have here," Avery says. "We really love the tap room and the brewery. We love having our beer on taps."

Wednesday June 12 - Arkansauce. plays a live and FREE show from 6-9.  This is a Family and Dog Friendly event

Thursday, June 13 4 pm- Release of first ever Mug Club. It starts promptly at 4 pm and it is a first come first serve deal. $50 yearly membership. Must be 21 to enter the Mug Club but otherwise, the taproom is still open to family/dogs.

Just in case here is a link to the race page and a copy of the Race Sign up Details:

Entry fee grants runner entrance into the race, a race t-shirt, souvenir High Cotton silicone pint glass, 4 beer fills at the 1/4 mile markers and an after-run beer token to be redeemed in the taproom during 5 year Anniversary Party

After Party includes FREE SHOW with Dead Soldiers. After party is all ages and dog friendly.

Additionally, winner of each division will receive a High Cotton Ceramic Mug and entry into the mug club.

Judges will award one division winner with Free Beer For A Year (their first beer free every day for a year in the Tap Room) It will be judged on style, race wear, guzzle technique, and other subtle things.