Guests got a sneak peek of Bar Ware and JuiceBrothers at a preview party, which was held July 10th at 276 South Front. Both businesses will open to the public on July 12th.


Founder Libby Wunderlich says she wants Bar Ware to be “a neighborhood bar. Casual. Stop in for a drink.”

Bar Ware, which serves a late-night menu as well as the regular menu, will be a great place for people who’ve been to the “Orpheum, a game, or (want) a nightcap on their way home.”

Wunderlich describes the decor as “eclectic, comfortable, loungey.” The lounge/bar also includes a patio on the North side.


Kevin Quinnell, formerly of Itta Bena and Southern Social, is Bar Ware’s head chef. The cuisine, he says, will be “upscale food you would not expect in a bar environment. Quality and creative without being too pretentious. We’ll focus mostly on shareables and small plates.”


Guests were treated to menu items, including BW2 (sliced beef wellington with bordelaise), deviled eggs, and watermelon with goat cheese. They also got samples of Bar Ware’s steamed sandwiches.


Jacob Leonard and Sam Hendricks are bar co-managers. Hendricks describes their drinks as “crafty cocktails without being too crazy pretentious or over the top.”


Among the cocktails are “Green Goddess,” which is made with Uncle Val’s gin, honeydew melon, sugar, mint, lemon and soda water on top; and “Indian Summer,” which is made of Wild Turkey Longbranch bourbon, lemoncello, lemon juice, apricot preserves and garnished with star anise.


But, Hendricks, says, in addition to cocktails, they also have “ice-cold PBR bottles, too.”


JuiceBrothers, an international juice and smoothie bar from Amsterdam, is housed on the south side of 276 South Front. It will feature fresh juices, smoothies, acai bowls, and tonics. They make immunity-boosting, antioxidant rich, anti-inflammatory blends from organic fruits and vegetables. JuiceBrothers also will feature freshly-brewed coffee from J. Brooks Premium Roasters.


Bibi Janus, a fashion designer now based in New York, is JuiceBrothers founder. She and Wunderlich have known each other for years. She discovered Memphis was a perfect fit for JuiceBrothers when she visited Memphis last May. “The city itself is so charming,” she says.


She loved the city’s hospitality - the way people greet her on the street. In Amsterdam and New York “isn’t like that.”


JuiceBrothers also will be closed on Monday. They will be open from 7 a.m. to 6 p.m. Tuesday through Saturday and 10 a.m. until 3 p.m. Sunday. 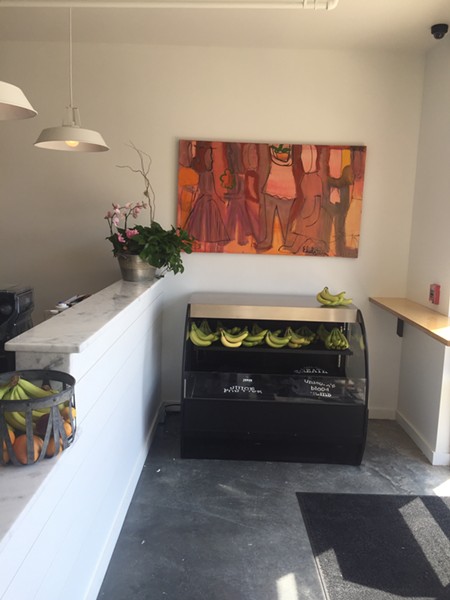