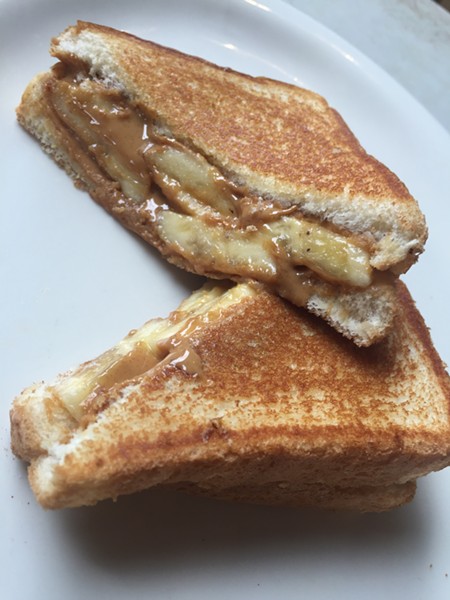 It’s time to get your Elvis on.


Elvis Week - with all the tributes to the King - begins August 8th. If you want a taste of what’s to come, try one of Elvis’ favorite delicacies - a fried peanut butter and banana sandwich. You can get one at the Arcade Restaurant.

If you like peanut butter sandwiches, this is one to the nth degree. It’s called the “Peanut Butter N’ Banana Sandwich.” The runny peanut butter melts into the creamy banana on toasted bread.


You’ll want more than one. I know I did. I could have eaten at least three.


Asked how they make the sandwich, Arcade owner Jeffrey Zepatos says, “You’ve got to fry up a good bit of butter on the old griddle, where we cook our bacon and everything.”

They use Texas toast, Zepatos says: “It’s just a little bit thicker. Texas toast has more of an egg base than regular bread. So, it fries a little better.”


They make the sandwich with the peanut butter and banana before they put it on the griddle. Everything is squished together. “You want to hold in the heat while you’re cooking it.”


They use about a half of a banana. “You want to get a little banana in every bite.”


The sandwich is fried for about two and a half minutes each side. “It’ll get a good brown crust to it.”


They added the PBB sandwich to the menu after his parents Karan and Harry Zepatos took over the restaurant in 2001, Jeffrey says. They wanted to serve an Elvis food item.


People mistakenly think peanut butter and banana sandwiches are strictly an Elvis food item, Zepatos says. The sandwich was “made famous by Elvis, but that was a North Mississippi meal. My mom grew up eating those even before Elvis became famous. It’s a good bit of protein with the peanut butter and the banana.“


They sell many more during Elvis Week, says Zepatos, who tried to keep count during last year’s Elvis Week. “We went through around 300 of those sandwiches. Maybe more. So, we’ve got to order many cases of bananas.”


Elvis actually was a customer at the Arcade, Zepatos says. “Elvis’ cousins would come in and wait for Elvis and they’d all hang out.”


If his fans became too aggressive, Elvis literally would leave the building. “When Elvis started getting famous, he’d get up and walk out that back door.”


Elvis fans love that door, Zepatos says. “It’s become a thing for people to do the old Elvis door. They’ll pay, obviously, but they’ll walk out the back door.”