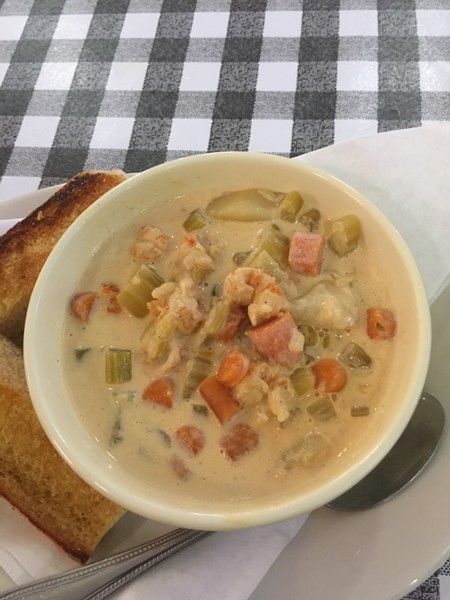 I craved lobster stew for decades without ever tasting it.


It’s all because of the 1957 song, “Old Cape Cod.” Patti Page sings, “If you like the taste of a lobster stew served by a window with an ocean view, you’re sure to fall in love with old Cape Cod.”

Every time I heard those words, I wanted lobster stew even though I'd never had it before. Those two words conjured up such a tasty dish in my mind.


So, imagine my surprise and delight when I saw “Lobster Stew” on the menu when I was at Flying Fish the other day. I didn’t know they sold it.

The song didn’t specify whether the lobster stew was served in a bowl or a cup, so I went with the bowl.


It’s wonderful. It’s the realization of the lobster stew taste I created in my mind.


Manager Owen Ray told me the stew, which contains lobster, celery, carrots, and cream, is "in the top tier" as far as popular dishes at Flying Fish. And, he says, “I love it.”


The weather outside was in the top tier — mid 90s — when I took my first bite of Flying Fish’s lobster stew. The stew definitely will be a quick lunch and dinner go-to when the weather is chilly.

Now that I’ve tasted lobster stew, I’d like to eat some served by a window with an ocean view. But I’ll settle for a Mississippi River view.