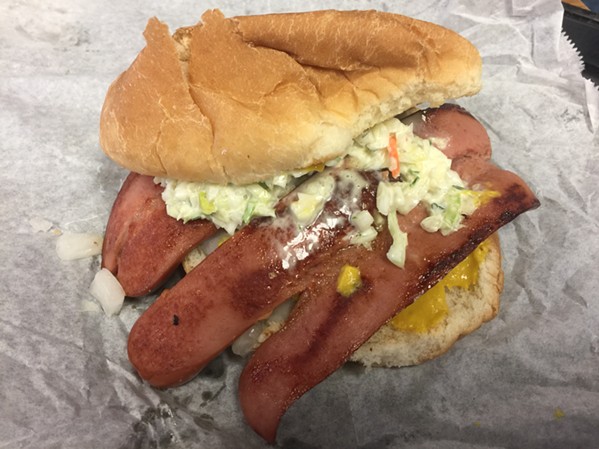 If you order a “hot dog” at Three Little Pigs Bar-B-Q, you’ll get the conventional wiener in a bun.


But if you order a “Double Dog,” you’ll get one of my all-time favorite sandwiches.

The Double Dog is two sliced fried hot dogs on a lightly-toasted hamburger bun. You can get anything on it, but most people order it with slaw, mustard, and onions, says Three Little Pigs owner Charlie Robertson.


“It’s a sandwich I thought of ‘cause I like hog dogs and I like a fried hot dog,” says Robertson.


He believes he got the idea back in the day from Dyer’s hamburgers when it was on Cleveland. “Only Dyer’s threw them in the grease and deep fried them.”


The folks at Three Little Pigs cut the hot dogs in half and “fry them on a flat grill almost like a hamburger.”


You grill the hot dog until it’s brown, Robertson says. “Most people want them really brown.”


He, personally, likes to - at times - take one of his hot dogs and “drop it in the deep fryer.”


Double Dogs have been on the menu since Robertson took over Three Little Pigs 30 years ago. “It didn’t just take off,” he says.


It’s still not one of their top sellers, he says, but I think they’re fabulous. I love the slaw, which has a slightly-sweet taste to it. It’s the same slaw they use on their barbecue sandwiches. “It’s got sugar in it,” Robertson says.


They buy chopped cabbage, but they make the sauce for the slaw from scratch. It’s the same slaw sauce recipe that was at Three Little Pigs when he bought the place in 1989, Robertson says. “And we stuck with it.”


I asked if it was mustard based. “It’s mayonnaise-based slaw.”


OK. Now that I’ve written this, I WANT ANOTHER DOUBLE DOG.