Highland Axe offers three lanes with six targets. People stand behind a line and throw an axe and try to hit the target.


But let’s start with the axe throwing.


Throwing that axe isn’t easy at first. I tried it twice and hit the flat of the axe against the wall both times.


Taylor Berger, managing partner in Partymemphis.com, which owns Highland Axe, Rec Room, Railgarten, and Loflin Yard, showed me the proper way to throw. You hold the axe in two hands with arms raised, take two steps forward, and throw. Berger’s throw, by the way, was right on the money.


You might have thrown an axe or two if you’ve been to the Rec Room. But Highland Axe is the ultimate when it comes to axe throwing. The back area, where the lanes are located, also includes a wide-screen TV, a bar, beer pong and seating for about 30 people. That space was a storage area until they converted it, Berger says.


Why axe throwing? “I got hooked on playing,” Berger says. He’d go to Rec Room with his buddies after the kids had gone to bed and throw some axes. But there’s no kitchen at Rec Room. Now, at Highland Axe, you can eat, drink and be an ax champion.


The main area includes three living room areas, each with its own set of couches and giant projector screen. You can rent out the seating areas to play video games, or, if nobody is renting them, you can relax and watch sports.


Berger installed a deluxe sound system, which will come in handy at Highland Axe dance parties and DJ nights. He also will offer occasional live music.


The menu includes a variety of appropriately-named items, including the “Axe,” “Big Axe,” and “Fat Axe” (thee patties) hamburgers.


I’m intrigued by the “Bad Axe Pop-Tarts,” which are pancake battered deep-fried strawberry Pop-Tarts with whipped cream and rainbow sprinkles. You get two to an order.


Movie posters from famous axe-related movies, including Friday the 13th, Golden Axe, American Psycho, The Shining, and So I Married an Ax Murderer, will hang on the walls.


Will they actually run axe movies at Highland Axe? 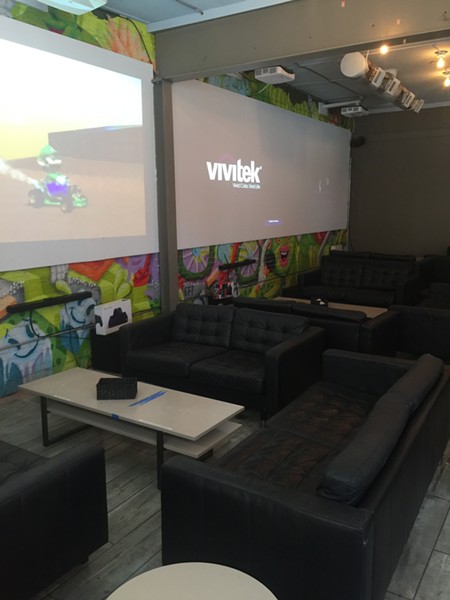