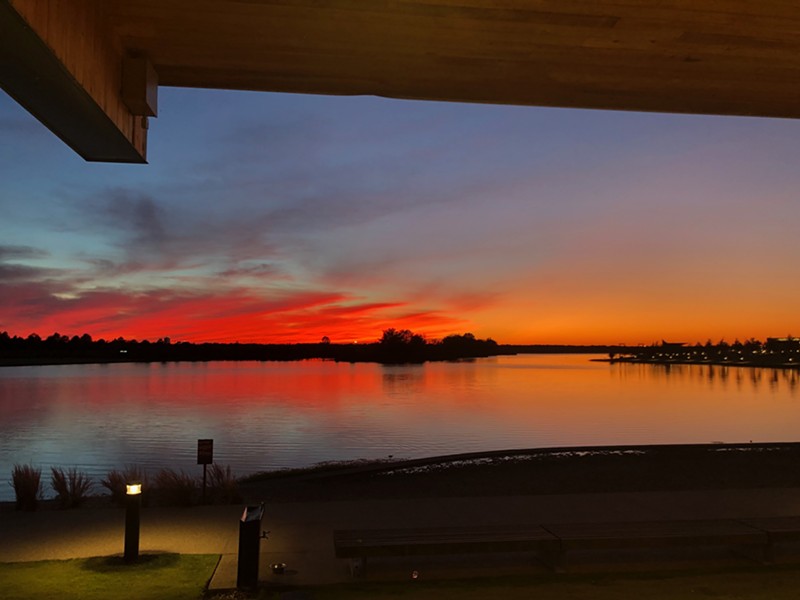 This is the new restaurant brought to you by Russ Graham and Tom Powers of the Flight Restaurant Group. They are the owners of Flight, Southern Social, and the upcoming Porch & Parlor restaurants. Coastal Fish Company is in the space previously occupied by the old Kitchen American Bistro.


First of all, Coastal Fish Company offers the most beautiful view of any restaurant in Memphis. It looks out on peaceful 80-acre Hyde Lake. Diners can eat inside and feel like they’re eating outside. Or, they can eat outside and be outside on the spacious patio. All of this, including the food, feels like your on the Gulf Coast, or in Florida, Or, actually, on any body of water you choose.


The decor is in light brown and the appropriate blue. New chairs and new tables now grace the restaurant. All new light fixtures were added.


The desk at the front entrance has been replaced by a new desk with a partial wall behind it. Tables have been added behind that wall so people now can dine in the bar area.


During my visit, I saw Lauren Resch, Graham’s fiance, painting some blue design work behind the bar, which also has new light fixtures as well as a TV to add “energy behind the bar,” Graham says.


Diners who visited the previous restaurant will notice everything has been removed that obstructed the view of the lake. Anything waist high was taken out, Graham says. A large chandelier also was removed. “We want everything to focus on the lake,” he says.

The patio area features 21 tables with seating for more than 90 people. The inside area offers 24 tables.


They plan to add a six or seven-foot table that will only back up to the front railing, so diners can be even closer to the lake.


Coastal Fish Company feels like a destination restaurant - like you’re far away from Memphis - when you’re sitting on the patio, says managing partner Jason Burgardt. “You look at the sunset and you stop. You forget where you are.


You can still keep your bearings if you desire. “If you look out there, you can see Clark Tower,” Graham says.


A glass wall currently is being made for the south side of the patio, because the wind tends to blow from the south, Burgardt says. They also will have chimineas and 16 or 17 heaters. The patio area will “look warm and feel warm,” Burgardt says.

Now for the food.


Ashton Hall is director of culinary for all the restaurants owned by Flight Restaurant Group. Eduardo Murillo is corporate executive chef.


I took a tour of the spacious kitchen, which also has a TV. But this television set shows what’s going on in all their restaurants. Murillo got the idea when he visited Thomas Keller’s TAK room in New York.


You can order wood-fired oysters, which are the only thing the restaurant’s wood oven will be used for, Gall says. They will be charbroiled on cast iron skillets.


You also can order raw oysters, but don’t expect to get a paper cup of red sauce and horseradish. You can pair the oysters with a variety of sorbets, including apple wasabi, cocktail, lemon, champagne, and chili and passion fruit. I was blown away when I tried the apple wasabi with an oyster. I love sweet and savory, so this was the zenith for that flavor mix. It’s incredible. Ditto the chili and passion fruit I tried. I can’t wait to try them all.

Like all their seafood, the oysters are flown in fresh from the Gulf and the East Coast - from Maine all the way down to Florida.


But they want to do seafood preparation from all over, not just New Orleans. “The best seafood the world has to offer and bring it to Memphis,” Gall says.


You also can build a “seafood tower,” which can include levels of oysters, a half lobster, shrimp, stone crab claws, caviar, and mussels. You get all of that if you order a “grand tower.’ Or, you can order everything individually.


The accent is on “fresh” and “quality,” Gall says. Nothing frozen at Coastal Fish Company. “We want to open up people’s minds to real fish.”


Meat includes “from the farm” ribeye and pork chops, “All steaks are prime,” Gall says.


Desserts will include key lime pie, which you can get coated with your choice of chocolate, including salted dark chocolate. You also can order strawberry key lime pie and pineapple upside down cake.


Drew Wooten is bar manager. The bar will feature craft cocktails. They will specialize in wines that will perfectly pair with seafood.


You can sit on the patio, watch the sunset, and wash down some of those raw oysters with a glass of Chenin Blanc at Coastal Fish Company.