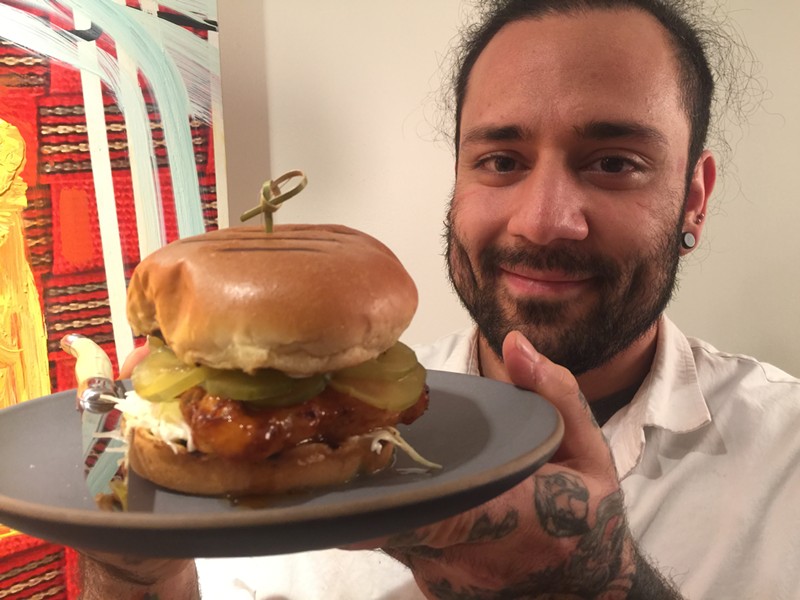 The Birdie might be the most unusual sandwich I’ve ever tasted. It’s chicken, but there’s a lot going on beneath the two slices of brioche.

The Birdie is a “wet-batter fried chicken” sandwich, Meta says. “It’s coated in Calabrian honey. We, basically, take the oil from those Calabrian peppers and we emulsify it in the honey, so it’s super spicy. And then we have a dill aioli. We make a dress slaw out of that. And then dill pickles on a brioche. It’s pretty simple, but pretty elegant little bar food.”

I asked Meta what he liked about it. “It’s got the elements of a classical chicken sandwich. It’s got the aioli and good solid brioche. I actually grill the brioche with butter. It’s a normal brioche, but it’s elevated with the dill, obviously. And that pairs really with the pickles that are already on there.”


The “genius thing” about The Birdie is that honey, Meta says. “The honey is really intense. It’s spicy. If you took a spoonful of the honey by itself it’s not fun. It would be adventurous. But on the sandwich you’re not trying to down some milk ‘cause it’s too spicy. Everything on there has a purpose.”

The spice, he says, is “balanced by the slaw. So, it’s a very balanced sandwich. You can’t really slow down when you eat it. It’s just gone.”


The sandwich was developed by Ticer and Hudman for “Birdies & Bubbles,” the pop-up restaurant they did at the the 2019 WGC-FedEx St. Jude invitational at TPC Southwind.


So, as photographers used to say, “Watch the birdie.” But you can watch this Birdie quickly get gobbled up at Eight & Sand.