The bar/restaurant encompasses about a block at the corner of Talbot and Main. The address is 363 Mulberry - the street that runs behind Slider Inn.


The building, which dates to 1946, previously housed a storage space for vintage trucks and automobiles. Original neon truck signs from “Kisber Auto Parts,” which also occupied the space at one time, will be reinstalled.


Entering Slider Inn, guests will see the “Wow Wall,” which will feature a mural of the neon sign at the original Slider Inn.


Looking up, they’ll see the illuminated 2000 Harley-Davidson Sportster motorcycle with custom features, including a “suicide shift.”


Robert Johnson, master woodworker, executed Dean’s vision for the wrap-around black walnut bar, which is the centerpiece of the room. The bar is mounted on top of a modular die bar system, which supports all the under bar appliances, Bourgeois says.


In front of the bar is a 12-foot-long community table built by Joe Boyd of Woodland Tree Service. One side of the table features a 12-foot-long foot rail for customers who like to rest one of their feet while having a sip or two. Slider Inn will feature a menu of new drinks as well as its signature drink, the Jameson Slushie - Jameson Irish whiskey, fresh-squeezed lemonade, ginger beer, and bitters.


The six enormous windows on the South side already are filling up with empty Jameson whiskey bottles. The ones in Slider Inn so far are from the Midtown location. Each window will be full of the bottles, which will be “hand decorated” by patrons after they finished the contents. That will be about 120 bottles per window or 720 total, Bourgeois says.

The kitchen is done in stainless steel. That’s just about everything - from all the appliances to the ceiling. This is where chefs will prepare all the items from the Slider Inn in Midtown as well as some new items, including “lobster popcorn.” This delicacy features tempura-battered lobster nuggets mixed in with the buttered popcorn and house-made sauce. Reuben egg rolls and Cuban egg rolls also will be served - one of each on the same plate.


Dean always wanted a mezzanine in one of his businesses, Bourgeois says. So, now he’s got one. It’s called “The Lift” - a nod to the lift that workers use in garages to get under vehicles. The Lift overlooks the bar/seating area.


The room is designed as a great hangout area or can be used for events, including birthday parties. Guests - the room can accommodate around 20 people - can relax on a long leather sofa and watch wide-screen TV. They also can relax on the custom-made “Roman Bed” with pillows that give the space a casual, “lounge-y feel,” Bourgeois says.

Vintage truck tailgates fill the area above the bed. Garage “creepers” - the boards on rollers workers use to slide under cars and trucks - also are used as decorations.


Looking up again, patrons will see a vintage 14-foot steel playground slide - the kind that used to burn your behind on hot days - hanging from the ceiling. It’s a nod to a similar slide on top of Slider Inn Midtown.


The chandelier is made from Tennessee license plates bent into a circle.


The courtyard on the North side of Slider Inn features more seating. Dean even thought of his canine friends. A dog-height drinking fountain just for Fido stands next to a fountain for adults.


On the other side of the courtyard is “The Garage Bar.” It features another bar and more seating. The sleek long tables, which are built in a waterfall design, are made of spruce pine.


Garage doors can be pulled up when the weather is pleasant.


It’s a “separate eatery,” Bourgeois says, but all food will come from the same menu and the same kitchen. Guests on both sides will be able to dine at the chilaquiles buffet during Saturday and Sunday brunch.


All that is Slider Inn.


“Slider Out” is the grassy area that fronts Main Street. It’s an “outdoor event space,” which will eventually include live music, Bourgeois says.


Or, as Dean calls it, “Prime grassy real estate on South Main.”


And - it all this isn’t enough - Slider Out will show movies outside on a wall, which will be covered with white vinyl. People can rent Adirondack chairs and blankets and “cozy up,” Bourgeois says. 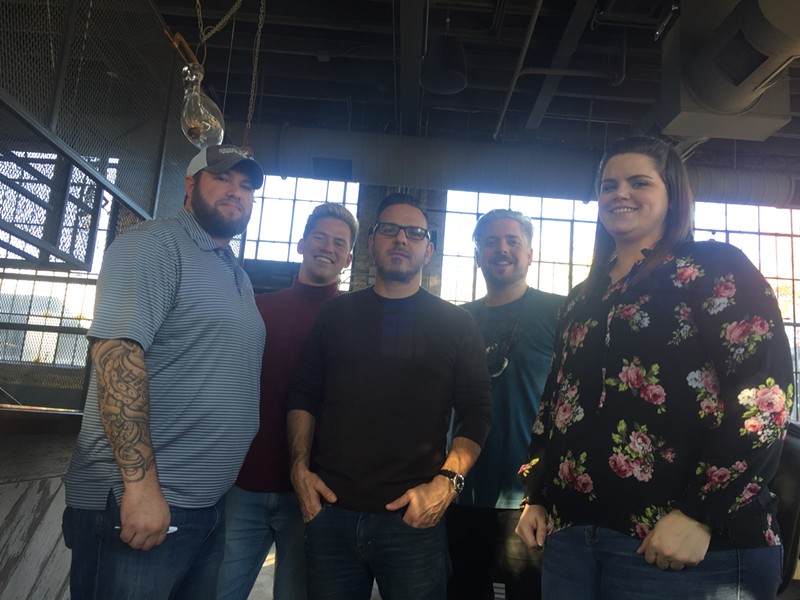