Thanksgiving dinner will cost one penny more this year than it did last year, according to an annual survey by the American Farm Bureau Federation (AFBF).

The agriculture advocacy group tapped more than 250 volunteer shoppers for the survey. They reported prices at grocery stores in 38 states for this year’s survey. AFBF has conducted the survey since 1986.

This year, the average American Thanksgiving Day dinner for 10 will cost $48.91, or less than $5 per person, according to the AFBF survey. This dinner includes a 16-pound turkey, stuffing, sweet potatoes, rolls with butter, peas, cranberries, a veggie tray, pumpkin pie with whipped cream, and coffee and milk, all in quantities sufficient to serve a family of 10 with plenty for leftovers, the survey says.
See related PDF AFBF_Thanksgiving_Dinner_Cost_Survey_Historical_Pricing_.pdf “The average cost of this year’s Thanksgiving dinner is essentially unchanged from last year, after three years of decline since 2015,” said AFBF chief economist Dr. John Newton. “Americans continue to enjoy the most affordable food supply in the world, but most don’t realize only 8 cents of every dollar consumers spend on food goes to farmers.” 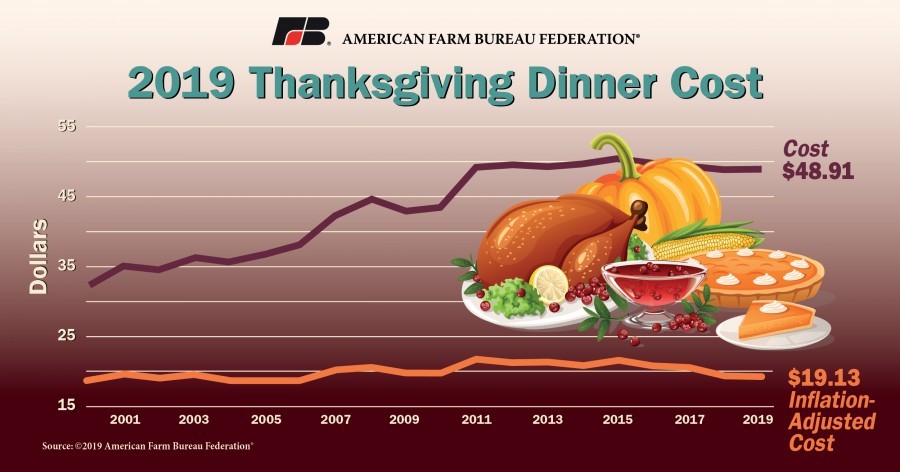 “Celebrating Thanksgiving is a family tradition for millions of Americans, but the rising costs of meat, dairy, and fresh produce can be a big concern,” said Ann Berry, professor and family economics expert with University of Tennessee Extension. “Seeing such a small increase [on Thanksgiving staples] is a big encouragement to many people. Budgeting for the big Thanksgiving meal can be burdensome, but prices holding steady will help many through the holiday.”

To make Thanksgiving celebrations more affordable, Berry suggested asking friends and family to bring an item and limit the number of dishes served.