“We’ve been open for delivery and takeout ever since this whole thing happened, and both have been doing really, really well,” says owner Ed Cabigao. “It took us a few weeks to decide how to open back up fully and make sure we’re following all the guidelines — and how that affects our operations and how we serve people. That’s why we took the past month to sit back and figure everything out, operations-wise, on our end.”

S.O.B.’s capacity will be 50 percent until Phase III begins. Tables will be six feet apart. Employees will wear masks, and hand sanitizers will be available. The restaurant will use paper menus, as well as feature a QR code on each table so customers can see the menu on their phones.

S.O.B. had planned to move next door to the old Ambassador Hotel at 345 South Main, “right across our parking lot,” but plans have changed a bit, Cabigao says.

The new S.O.B. will have 5,000 square feet and three private dining rooms. Cabigao believes private dining rooms “will be even more in demand with this whole COVID thing, and people want to have their own private room with family and friends. We’re thinking when we open up in October we’ll be able to generate more revenue that way as well.” 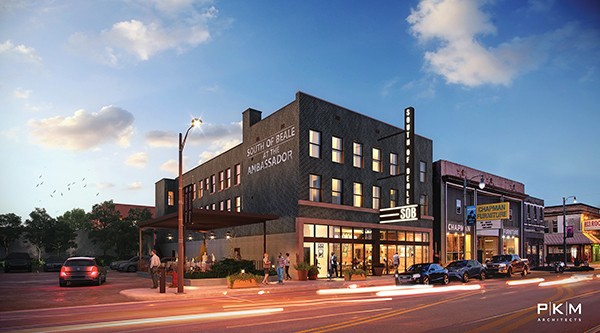 As for the current S.O.B. location, Cabigao says, “We own that building, so we plan on renting it out to another restaurant concept that complements the neighborhood.”