Alex Grisanti Now in the Kitchen at Ronnie Grisanti's Restaurant 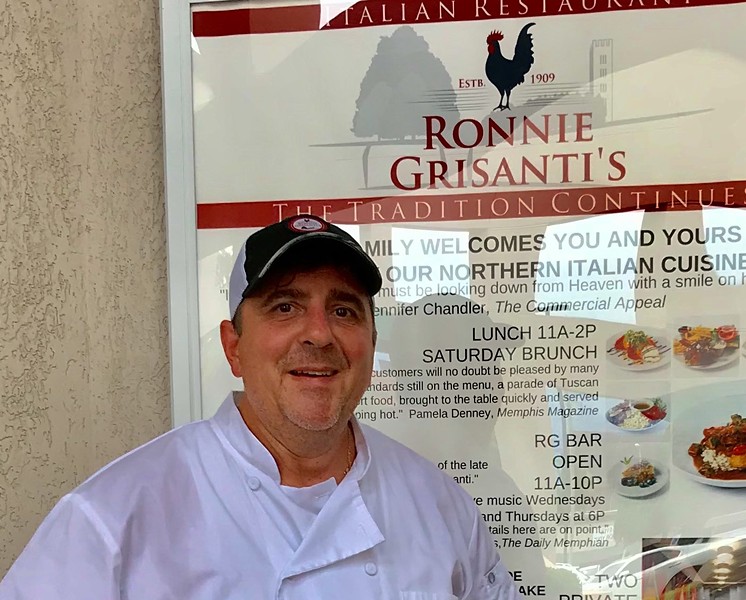 It’s a “sons” thing again. Alex Grisanti recently joined his brother, Judd Grisanti, in the kitchen at Ronnie Grisanti’s Restaurant in Regalia. Their brother, Dino Grisanti, is one of the owners.

Alex, who will continue to operate his 9-Dough-1 food truck, is glad to be back.

“My dad’s name is on the building,” Alex says. “I want to keep that Grisanti quality going that Memphis is used to, and give our customers what they expect out of us Grisantis.”

The Grisanti brothers cooked at the Ronnie Grisanti’s restaurant when it was at 2855 Poplar at Humes. Dino, who also is in the car dealership business, worked in the kitchen at one time. Alex was chef/owner of the old Elfo’s restaurant in Germantown.

Judd and Dino asked him to come back, Alex says. He says he told them, “When I wasn’t on my truck, when my truck’s not working during the holiday season when we’re not so busy, that I would come help him and make all the pastries and stuff like that.”

“That’s what kind of got me back there,” says Alex, who now will be doing all types of chef duties in the kitchen.

And, he says, “When Judd’s not there, at least there’s a Grisanti in the building. Like me and dad, Judd, down on Poplar. Just like the old days.”

His food truck - or bus - business is doing “phenomenal,” he says. People still are going crazy over his crawfish pizza and other pizzas.

“This is coming up on our third year with the food truck. I worked nine shifts in the food truck last week. Our business has tripled. Because we’re feeding hospitals and their nurses and big companies where people have to go to work. Like right now, we’re at Campbell Clinic feeding all the doctors and nurses here.”

And, he says, “We built a new truck this winter and it’s doing great.”

It’s actually a “cargo, transport bus,” he says. “I got a bus five or six months ago and it took me all winter to build it. But it’s out and done.”