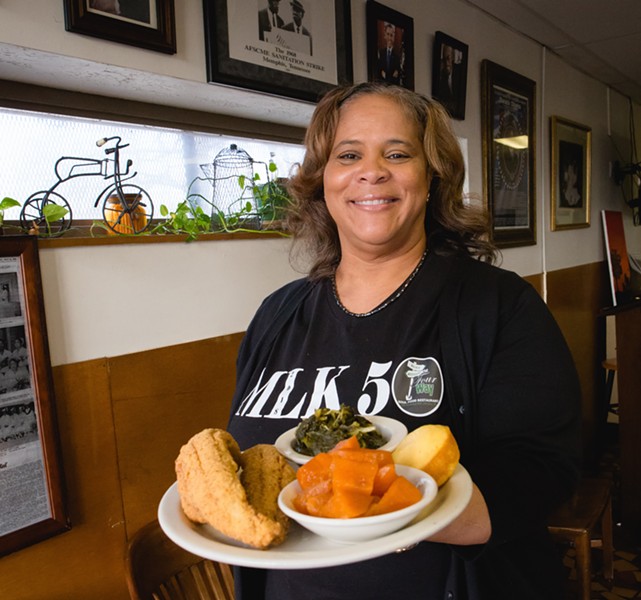 The wait is over. The Four Way Restaurant will begin offering its full menu — just a bit tweaked — for takeout beginning Friday, July 17th.

The iconic restaurant has been serving a limited menu for the past several months, but now Thompson is ready to offer just about all the restaurant’s other items.

Fried catfish is their top seller, she says. “And the turkey and dressing and fried chicken run next, behind that.”

As for the menu, she says, “We’re going to kind of tweak it just a smidgen. Create specials on certain days.”

Pork chops were an every-Wednesday special, but, Thompson says, “I’m going to move pork chops to Sundays ’cause I know people really like them and they sell really well.”

Customers also will be able to get the restaurant’s popular neck bones, as well as their vegetables. “The only thing we use from a can are the pickled beets. Otherwise, we make everything in our kitchen. Our cabbage, yams, greens — they’re all fresh.”

The restaurant now will offer its regular menu items for call-in and walk-ups between 11 a.m and 4 p.m. on Fridays and Saturdays and every first and third Sundays. “We’re working on developing and online ordering service soon, which will provide contactless service.”

She’s not ready for in-house dining, Thompson says. They plan on opening “when the numbers have leveled off or dropped significantly. So, my thought is, when everything’s leveled off and we feel like it’s safe. I just don’t think it’s safe right now.”

Thompson is part of the Bates lineage that has owned the restaurant since 2002. Her parents, the late Willie Earl Bates and the late Jo Ellen Bates, bought the restaurant, which originally was opened in 1946 by Clint and Irene Cleaves. Dr. Martin Luther King Jr. is among the notables who have dined at The Four Way.

A native Memphian, Thompson was raised on her mother’s cooking. Her mother, who grew up in Haywood County, “learned to cook from her mother.”

And, Thompson says, “Things we have to go to the store to buy today my grandparents had in their backyard. Greens, cabbage, peppers. I could get chitterlings all year round if I wanted to.”

Thompson began cooking when she was in the fifth grade. “For some reason I learned how to fix spaghetti, which is actually the recipe we use today. Over the years I’ve kind of tweaked it to make it my own. And lasagna, too. One of my dishes I perfected early on before I went to high school. I’d periodically cook for my family. I learned how to fix spaghetti, lasagna, chili, and cakes. I did a lot of baking. So, those are things my mom would let me play around with and I perfected.”

Thompson, who was in middle school at the time, only visited The Four Way twice before her father bought the restaurant. She went on to Hamilton High School and then Xavier University in New Orleans, where she graduated with a degree in management information systems. “You would manage software progress on the computer. I had been in management since I graduated, but I was always managing people and departments. Not software.”

She remembers when her dad bought The Four Way. He “didn’t know how to cook at all. My daddy was not a cook. He was a business man. He was an entrepreneur. And my mom was a business education teacher for the Memphis City Schools for 42 years.” 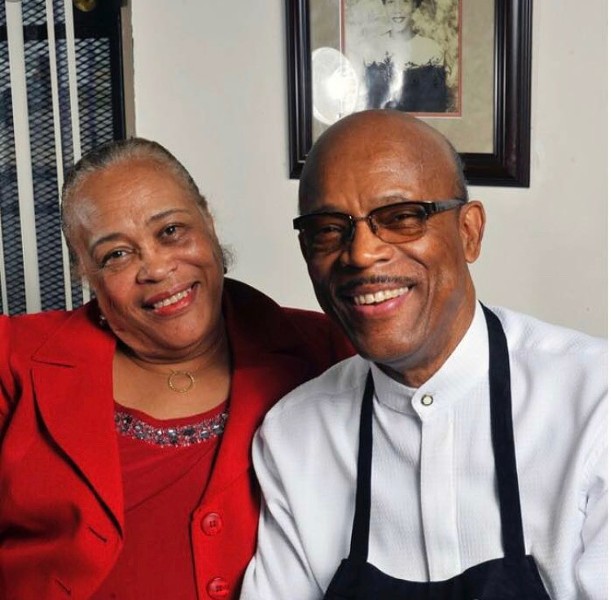 Her father “purchased the building with the goal in mind of having a business in the neighborhood he grew up in, LeMoyne Gardens. His hope, mine, my children and husband, we pray other businesses will come back to that community and be a part of that community to revitalize the community.”

Her father bought the building with a friend, Thompson says. “He didn’t know what he was going to do with it, initially. My husband, who has over 33 years of restaurant and food industry experience, convinced by dad to reopen The Four Way because of the history.”

Her father “just kept the name of the original restaurant. People still refer to it as the ‘Four Way Grill,’ but for legal reasons my parents dropped the ‘Grill’ and just went with ‘The Four Way Restaurant.’”

But, she says, “All of them closed” before her dad bought the building. Her dad gutted the building and expanded the restaurant.

They didn’t have a lot of the restaurant’s original recipes when they opened, Thompson says. “I think we lucked up and found a couple of them, but most of the recipes we have are our family recipes.”

The restaurant was an instant success, much to her dad’s surprise. “It was also a shocker for him. He probably didn’t expect it would take off that quick. So, we were kind of bum rushed and we had some hard times ’cause it wasn’t as good as it needed to be. Some people were discouraged. But we regained the customers, some that we lost.

“I remember the day we opened there were people everywhere. We didn’t have enough employees to service everybody. We had some faithful people that stayed and waited and supported. ’Cause my dad grew up in Memphis. They knew him and they came to support him.”

Some customers “helped serve the first day. And I would say the first week. It was crazy. Maniac crazy. We were in over our heads. We were not ready. “

But “over the years with trial and error and just learning to organize” and with her husband’s experience, they’ve “gotten a whole lot better. We’ve done a tremendous turnaround.”

Thompson, who graduated from Xavier in 1989, worked at The Four Way from the time her dad bought it. “I worked part time. I was office manager at Metropolitan Baptist Church. I could walk from my church in five minutes in the next block and work at The Four Way.”

She did whatever she needed to do. “I’d work in the kitchen. I’d work the register. If I had to serve, I’d serve. To be honest, I still do that. Sometimes you’re short handed. You never know when your employees are going to come in and have a chip on their shoulder and not do what they’re supposed to do. I just fill in where I need to. You might come in next week and see me on the line.”

Her mother worked at The Four Way “until my dad passed. It was just me and my brother, Roman Bates. We lost my brother in 2013. We were all devastated by it, but my parents went through major depression. And I don’t think my mom ever kind of got out of that.”

Her mother took over the restaurant on paper, but, Thompson says, “I was doing all the work. She didn’t really do a whole lot of the physical work after my dad died. She was doing most of the paper work at home. And she would come up a couple of days.”

Thompson and her husband have two children. “JoElle Thompson — she was named after my mom — just graduated from Hampton University. A biology major. And our son gradated from the United States Naval Academy in 2018. Jerry R. Thompson.”

The Four Way Restaurant is a part of all of them, Thompson says. “Ultimately, my goal is to work another 12 to 15 years and try to hold it down. JoElle works with us full time. Her ultimate goal is to get her master’s in public health. I want her to reach her dreams and goals, but, ultimately, the restaurant is going to be passed down to them. I feel in my heart they may run the restaurant.”

And, Thompson says, “We’ll see. We definitely plan on keeping the restaurant in the family. My children will inherit what I inherited.”