The City's 'Best' Bartender Steps Away After 15 Years

If you’ve ever had a perfectly pulled pint of Guinness backed by a perfectly timed dad joke, you’ve been served at Celtic Crossing by Allan Creasy, easily one of the best bartenders in Memphis.

Flyer readers have voted Creasy as the city’s best bartender for several years in our annual Best of Memphis poll. He believes the honor should go to a slate of other bartenders, whose names he can reel off the top of his head. But our readers have put him at the top of the heap so many times, he must’ve had some magic mojo behind the bar.

Creasy’s 15-year magic at Celtic Crossing ended this past weekend. He stepped from behind the bar and into a new role at Future 901 to raise money for progressive political candidates in West Tennessee.

The differences in the roles could seem stark if you didn’t know that while at Celtic, Creasy ran twice for a state House seat for the 97th District. He didn’t win but raised the debate on progressive topics here, and raised his own political clout.

While his friends and regulars have commended him on getting a “big-boy job,” Creasy says no. He’s passionate about the restaurant industry and respects and cherishes his time there and those who work in it.

We caught up with Creasy after his final weekend shifts. He talked about his service-industry career, what makes a good bartender, and his moves into a new career. — Toby Sells


Memphis Flyer: So, how were your last few shifts up there? How was the weekend?

Allan Creasy: It was pretty phenomenal. My last day, I got surprised. [D.J. Naylor], my employer, sent me a bagpiper who led me out to the patio and, you know, socially distanced gave me a going away speech, and they had cake.

It was definitely not as big as sendoff as it might have been during other times. But it was really moving. It touched me, certainly, in many ways.

MF: Did a lot of regulars show up and say farewell?

AC: I had a lot of folks who showed up. There's only so many people you can allow in the building at a certain time, right? I had all those tables adjacent to the bar with friends, regulars, and plenty of elbow bumps that symbolized hugs. Yeah, it was very touching. It was really moving.

MF: How did you start working at Celtic?

AC: Well, way, way back in the day, I worked at Dan McGuinness Downtown. When I left there, a couple of folks who had worked at McGuinness had left to start at Celtic. At first, they didn't feel so right about hiring me because they didn't want to feel like they were stealing employees.

But it was late night one night — 1 in the morning — and I was working on Beale at the time and a ran into the [Celtic general manager] at the time. He bought me a shot of whiskey and said, “You want to come work for me?” I said yes.

You know, restaurants are supposed to do job interviews between the hours of 2 p.m. and 4 p.m.

MF: (laughing) I guess they just shifted back about 12 hours given the nature of the work, right?

Did they did you start as a bartender?

MF: Then, later on you got a shot and got behind the bar?

AC: As other folks moved on, I suddenly looked up and kind of realized that I was the one of the main folks there. [The bartender job] just kind of came slowly but surely over the years. By 2008-2009 I was behind the bar pretty much full-time.

MF: Flyer readers have voted you as the best bartender for many years in our Best of Memphis poll. What do you attribute that to? What makes a good bartender? How do you approach your job?

AC: I think more than anything else it is listening to people. It's not done as much, and I don’t think it’s appreciated. That’s a stereotype about bartending, but it's damn true. I just try to listen to people.

You’ve got to listen to people, but you got to keep moving. You’ve got to make that quick, one statement, and then you got to get out, get to that next person. You can't be trapped.

To be honest with you — when it comes to being a mixologist or anything like that — I'm a terrible bartender. David Parks (Memphis Whistle), or Vincent Hale (Dodici and Bari Ristorante), and the folks over at Bari, or the folks at Catherine and Mary's, they're much better at [mixology]. I was just the guy who could really quickly get you your draft Guinness, or your whiskey-Coke, and make a one-liner, and give you a dad joke you hadn't heard before.

So, I always felt a little guilty when I would come ahead of folks like, you know, David Parks in the best bartender [category] or Vincent Hale, the folks who do things that I've never had the ability to really do. I've always kind of felt a little guilty about coming out ahead of those folks because it's two different skill sets entirely.

MF: Everyone knows you’re a good damn bartender but probably not many folks know that while you were at Celtic you ran for office twice. The District 97 House seat, right?

But it's all those things that you do as a bartender — listen to people and try to come up with a solution for their problems — it’s the same thing that needs to be done for people running for office.

I, honestly, got tired of being behind that bar. People would tell me their problems. It wasn’t just about the girlfriend, or the boyfriend, or the ex. People worried because their kid’s school isn't doing well, or they've been a victim of violent crime, or their record got so messed up because they got caught with weed years ago. It just felt like I needed to do something other than to just keep posting on Facebook.

I started out volunteering as much as I could for local nonprofits, as a bartender. But that led to helping local political candidates as a volunteer. I would usually canvas as a door-knocker. Then, I was, basically, running field [offices] for local candidates on a special election.

At that point, the executive political director of the state party said, “You need to think about doing this for yourself.” My response was, you know, I'm just a bartender. His response was, “Who the hell cares? Go out there and do it.”

Even though we came up short in 2018, in 2020 we ended up in a primary against a really phenomenal candidate, Gabby Salinas. I'm very proud of the campaigns that we ran, especially trying to run a campaign during the darkest days of COVID. As far as Xs and Os, it’s a loss. But I think in many different ways, it's a win. I’m really proud of that.

MF: That kind of leads into your new job at Future 901. What do they do and what are you going do with them?

AC: What everyone thinks about someone running for office does happen, going to campaign events and giving some speeches. But that's the tip of the iceberg. 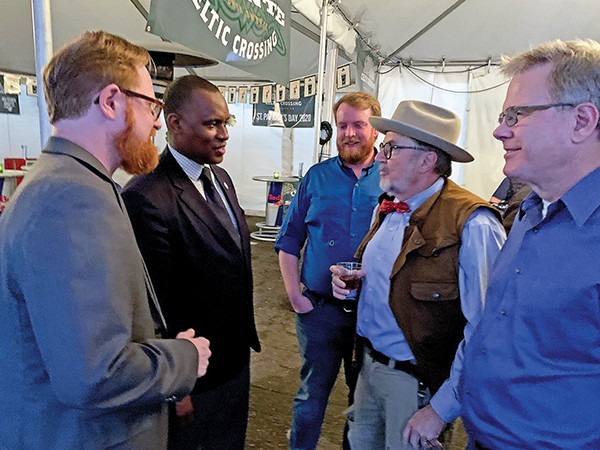 What you really are doing for the majority of your time running for office is calling people and asking them for money. You’re telling them that your ideals are ideals worth investing in and that you have the ability to be in striking distance to win. A lot of folks still don't realize that when they first run for office.

Working in the restaurant industry, I have no shame asking people for money while maintaining a sense of dignity. I lived off people’s spare change for a good while of it and pretty well for 23 years, 15 at Celtic. So that’s what I'll be doing with Future 901 is helping them fund-raise and move our state legislature forward.

Those truths need to be out there. They need to be told to the voters of Shelby County. So I'll be doing my best to fund-raise for them so that those stories can be told about those candidates, like my former opponent, Gabby Salinas, and Jerri Green.

MF: Is there anything that we left out or anything you want to add before we get off the phone?

AC: I want to thank my employers [D.J. and Jamie Naylor] and my co-workers for 15 long, damn-fine years that I'm very proud of.

Also, there’s another thing. I've had some folks try to congratulate me by saying, “Congratulations on getting the big-boy job” or ”the grown-up job.”

For me and for a lot of folks who work in that industry, that is the big-boy job. That is something I respect and cherish and there are plenty of us in that field who take that job very seriously and care an awful lot about what we do.