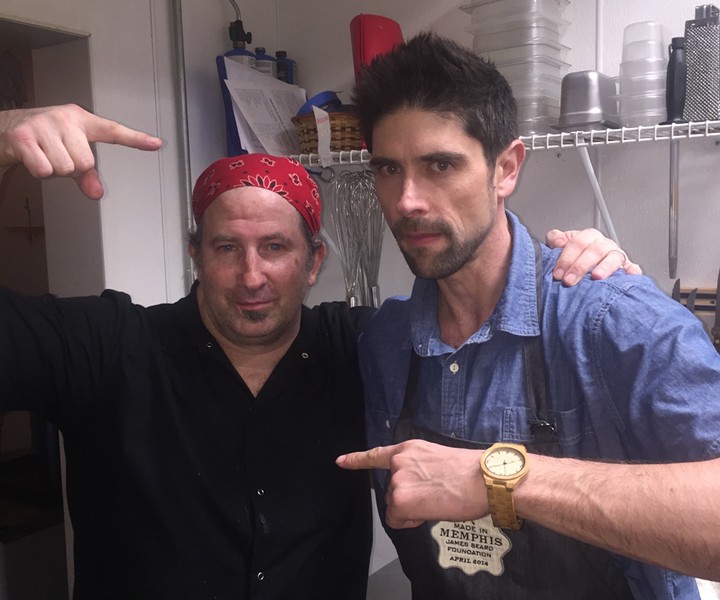 Chef Spencer McMillin is about to release a new website and blog, which will launch his new cookbook.

As he refers to himself, “I’m just a busy body.”

Thesaltiestwords.com, which will include stories and recipes, also will be the launching pad for his upcoming The Caritas Cookbook: A Year in the Life With Recipes. Both are slated to be released in mid November.

“I write a lot and a lot of it is not publishable, but it’s stuff the general public will appreciate,” says McMillin, 50. “I’ve got a group of people who like to read the down-and-dirty stuff. The less-publishable things. I write off the top of my head.”

And, he says, “This is not Paula Deen.” He referred to his blog on a Facebook post as “the dreaded (and not for the easiest offended) blog.”

His first piece on "The Saltiest Words" blog will be Chasing Tony, which is about the “wilderness years” of his career. “Back in the early 2000s when I was between chef jobs and I was working at Bronte Bistro at Davis-Kidd Booksellers. I was kitchen manager. I was at a real low point in my life.”

That’s when he discovered the book, Kitchen Confidential: Adventures in the Culinary Underbelly, by chef Anthony Bourdain. “I would leave the kitchen and just go sit in the book section and read that book when I should have been working.”

He didn’t just read the book. “I reached out to Tony Bourdain and struck up a friendship.”

McMillin had written a 200-page book called The Food Fighter. “That was kind of my version of Kitchen Confidential. It spanned my career from 1983 to 2001.”

He got in touch with Bourdain on line. “I noticed Tony was a poster on a food message board, eGullet.com. He had just done a Q and A with fans and he was still posting on the board. He was interacting with fans and stuff, so I started interacting with him and he kind of took to the way I wrote. He identified with it.”

McMillin sent a copy of his book to Brasserie Les Halles restaurant, where Bourdain was working in New York at the time. “He wrote Kitchen Confidential and got real famous. He just got on A Cook's Tour. But he wasn’t too famous to interact with fans.”

Bourdain sent him some tips, McMillin says. “He sent me a couple of emails of advice after he read it that I’ll never forget. One of the things he said was, ‘Write like you talk. Speak the truth.’”

He also told him, “Write about experiences.  Don’t write about writing. That’s pretentious.”

Bourdain got McMillin in touch with Michael Ruhlman. “He wrote about chefs. He wrote The Soul of a Chef, The Reach of a Chef, The Making of a Chef, and he was one of Bourdain’s favorite writers.”

McMillin sent Ruhlman a copy of a piece he wrote about his experiences at acclaimed restaurant, The French Laundry. Ruhlman was co-author of a French Laundry cookbook with the restaurant’s owner, Thomas Keller. “He ripped me a new asshole. He told me the voice is wrong, the tone is wrong, the pacing is wrong. He just kind of put me in my place. Which was kind of the best thing that could happen. To be a published writer, you have to listen to the good, the bad, and the ugly. His criticism made me assess where I was going. It helped unleash the writer I am today.”

McMillin changed his writing  style a bit. ”I took the testosterone out  of my writing as much as I could and tried to report factually. Initially, a lot of it I tried to mimic the way Tony wrote ‘Kitchen Confidential.’”

And, he says, “I found my voice, found my tone, reported factually. I didn’t create scenarios. One thing Ruhlman said was, ‘It seems like you’re trying to create a mystique about The French Laundry that isn’t there. You need to review it objectively.’”

Grains of Salt, which “plays on the title of the blog,” will be his second blog piece, McMillin says. “It’s all about ways to save the restaurant industry.”

It includes his experiences with “Feed the Frontlines Memphis,” an initiative co-founded by McMillin and his wife, Kristin, to “feed frontline warriors — nurses, doctors — to put revenue in the pocket of restaurants,” and “The Restaurant Phoenix Project,” a program put together by the McMillins and Bobby Maupin of “collaborative chef dinners to raise money for restaurants.”

The piece, without giving names, details “who’s being smart and who’s not being smart” in regards to restaurants operating during the pandemic.

It also will include, also without giving names, “restaurants that will not be here in six months because they refuse to budge” as far as changing during the pandemic.

During the pandemic, McMillin read 30 books by authors he admires, including Elmore Leonard, Nicholas Freeling, and George Orwell. “The main thing I get is honesty. I just write like I talk. The word ‘fuck’ comes into play. I think readers that I like to read are the people that write like they talk.  I’m not trying to be a highfalutin literary genius.

“I think my writing is essentially one’s life lived. And trying to do it as honestly as possible.”

Recipes will include some he and his wife gathered on a recent vacation. “We got out for five weeks and traveled around the South gathering recipes. I did a lot of cooking in the outer banks of North Carolina.”

Some of the recipes are geared toward people cooking during the pandemic, which includes the McMillins. “Being stuck out of the farm with a pantry full of ramen noodles, some moldering cilantro, a couple of onions, and a little bit of hoisin sauce. You make ‘compost bin ramen.’ Take rotting vegetables and throw them in the compost.”

McMillin told himself he would have his first published book by the time he was 50. He describes The Caritas Cookbook: A Year in the Life With Recipes as “a snapshot or a yearbook of an amazing year in my life.”

Mcmillan, who was executive chef of Caritas Community Center in Binghampton, says the cookbook is “not a historical piece. I didn’t write the history of Caritas. I wrote it as an interloper. A guy that came toward the end of it and cooks some amazing food with some amazing people. And we fed the homeless and supported restaurants. We put out a good vibe and we made the world a better place.”

Caritas,which means “a love of all people,” was the concept of Onie Johns, a “Germantown housewife that got disillusioned with life in the suburbs. And she had a desire to help people. She used to go to church in that neighborhood and see guys hanging out on the steps getting in trouble. She decided to move into the neighborhood and create a neighborhood center and cafe and help people.”

The cookbook includes stories and recipes. “I believe there are 12 chefs featured. All local. Ten local farms. That’s the theme of the book. We used as many local meat producers, vegetable growers, local chefs, as we could. It’s all about supporting the local economy and supporting the local community, whether it’s the underserved or the local culinary scene.”