Get ready to wet your whistles. A new brewery is coming to town.

Hampline Brewing Company is “on track to open by New Year’s” at 584 South Tillman Suite 1, between Broad and Summer on the same property as Rec Room and Civil Axe, says Martha Hample, one of the brewery's key management people alongside Richard Rhodes, who owns the property, and regional brewer Wes Osier.

The brewery is named after the Hampline bike path that runs from Overton Park down Broad, she says.

Osier, formerly of Urban South and Abita Breweries in New Orleans, Terrapin Beer Company in Athens, Georgia, and SweetWater Brewery in Atlanta, wanted to open a brewery in Memphis, Hample says. “And at that time, we were using this space as an adjunct facility for Maciel’s on Highland. It’s a small space, but we thought this would be a good place to do a small brewery. It’s down the street from Wiseacre, which creates a little bit of a brew path.”

They began raising money for the brewery, but, she says, “The good old pandemic got in our way, which delayed things considerably.”

They kept going. “It’s what kept us going through the pandemic.” 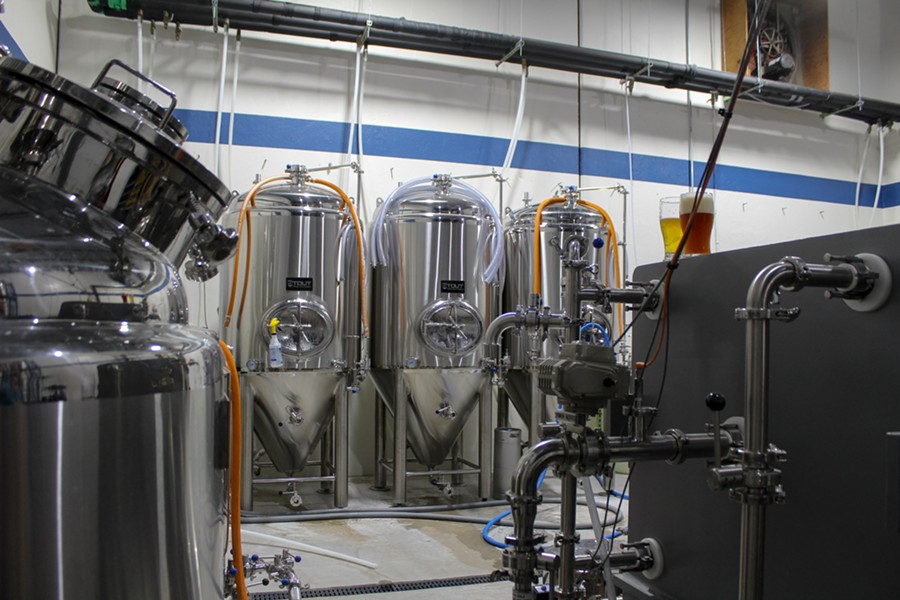 Among the beers are “Dunk Tank,” a German/Oktoberfest dunkel that is “just about ready to drink,” Hample says. “A lovely brown beer brewed in the German style. [Osier] spent a lot of time in the service in Germany. He learned to brew in part while he was there.”

Other offerings include “Tarter Than Average Bear,” a blackberry gose; “Handlebar Haze,” a New England IPA; and “Memphis Natch,” a light lager.

"Memphis Natch" was named after a famous Memphis bear, Hample says. “Richard Rhodes’ great-grandfather was given a bear and it ended up in Overton Park for people to look at as an oddity.”

And, she says, the bear became “the first animal in the Memphis Zoo. And that bear’s name was ‘Natch.’”

Natch will be the brewery’s mascot, and a caricature of the bear will appear on all the beer. But, Hample says, “The original bear was not blue.”

The taproom, slated to open this winter, will feature locally-crafted, high-top tables for enjoying the beer, as well as light snacks and viewing of live sports on a 49-inch flat screen TV. Additional seating will be on the covered outdoor patio on the upper level. The grassy beer garden on the lower level will feature custom picnic tables and a shade trellis.

An expansive outdoor space connects the brewery to Rec Room. It includes a new greenspace, trees, shade sails, and a new deck at Rec Room.