Flavors of the Delta at King & Union Bar Grocery

At the corner of B.B. King Blvd. & Union Ave., the site of the former TGI Friday’s now offers something that feels a little closer to home. King & Union Bar Grocery, the new restaurant connected to the DoubleTree by Hilton and situated just across the street from AutoZone Park, recently joined the Downtown dining scene with an authentic take on food and recipes from around the Mid-South. 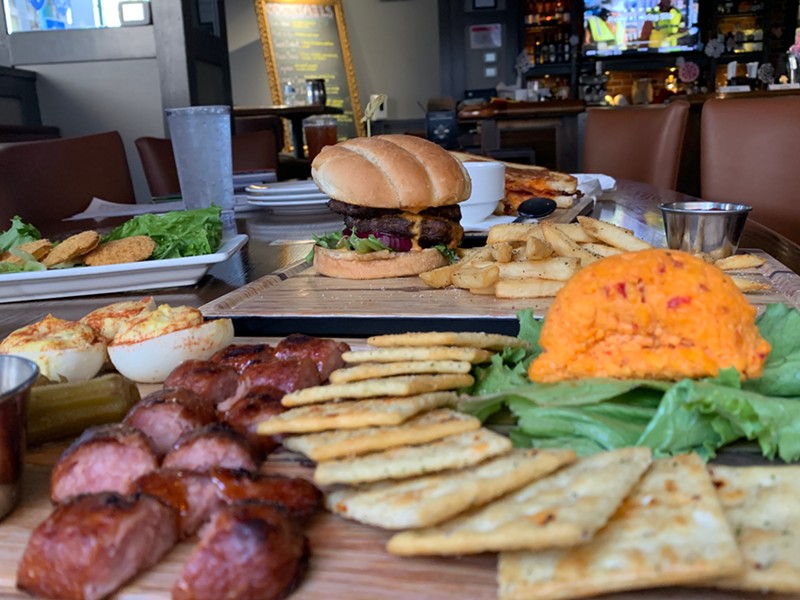 “The Friday's model was an extremely successful restaurant model for decades,” says DoubleTree general manager David Rossman, “but tastes change, and habits change. When the pandemic hit, we reevaluated our strategy and decided to pursue something that’s more authentic to where we are.”


King & Union, which opened July 20th, has a menu which offers plenty of staples that people who grew up in the Delta would recognize. Glenn Brown, director of food & beverage, grew up in Grenada, Mississippi, and uses his history and experience to inform the restaurant’s offerings. “We’ve got classic Southern cuisine,” explains Brown, “but with a little bit of a twist, too. And that’s what makes it so good, just that extra little bit of creativity.”


And Brown’s outside-the-box thinking is on full display with King & Union’s new Thanksgiving special. A holiday twist on the classic chicken & waffles concept is flipped into turkey & waffles. “The waffle is made out of cornbread dressing,” he says. “We’ve got thick, oven-roasted turkey on top, with gravy and a bacon cranberry chutney. And we’ll serve that over mashed potatoes and green beans.”

That inventiveness is on display throughout the whole menu, with each plate serving a pretty generous helping. The KU Burger sticks two all-beef patties with the regular fixings, as well as pimento cheese, fried green tomatoes, and the restaurant’s comeback sauce, which Brown describes as a “jazzed-up remoulade.”


“Or a bluesy remoulade,” offers Rossman.


But the X-factor that really catches the eye, and the taste buds, is the pimento cheese, which appears all over King & Union’s menu. It settles nicely on the KU Burger; centers the charcuterie plate alongside kielbasa, deviled eggs, pickled smokra (okra pickled with smokey paprika); and, crucially, anchors its own sandwich. The “Mama Rue” combines sourdough bread, bacon, pimento cheese, and tomatoes, and is a tribute to an important figure in Brown’s life.


“Mama Rue was my grandmother,” he recollects. “But the thing is, she did not cook. The only thing in her house when I was growing up was store-bought pimento cheese, which was horrible! But I thought of her when I was trying to come up with new recipes, so I put all these ingredients together, threw it on the grill, and it’s one of the best sandwiches you’ll ever have.”

And King & Union’s pimento cheese truly does pop. Made in-house, the recipe mixes in firecracker peppers to give it a little extra oomph and a lovely reddish hue, reminiscent of the sunsets over the Mississippi River.

For the intrepid diners, those keen to try out new things or in search of something unlisted, there’s the “secret menu,” where King & Union tests out potential new recipes. And the experiments are usually right on the mark. Brown initially trialed the King Cristo this way, a breakfast sandwich with “grilled ham, raspberry compote, Dijon mustard, powdered sugar, Swiss cheese, and the whole thing fried just like French toast.” That item proved so popular, it worked its way onto the full menu. As for finding the secret menu, well, you’ll just have to visit King & Union a few times and puzzle that one out for yourself (and never forget to keep an eye on the social feeds).


Underpinning every good food experience, of course, is a loaded cocktail menu, and King & Union delivers. The restaurant retained much of the staff from Friday’s, and longtime bartender Sean Hart has spent years coming up with new drinks to try, all using local liquor.


I went with the Ginger Basil Smash, based around Old Dominick Bourbon and accentuated with a strong dose of ginger, sugar, basil leaves, and lemon juice. The Muddy Waters also merits attention, another bourbon concoction with a coffee-infused caffeine kick, accompanied by Madagascar vanilla and sugar.


Want something that’s not on the menu? The bartenders are more than happy to try anything. “We have a lot of drinks named after longtime regulars,” says bar manager Katie Bowles. “And if you ask for something we haven’t done before, well, we’ll probably name a drink after you, too.” On tap, there are 14 beers, 10 of which are local (Rossman concedes that they need to have Bud Light available).

And King & Union has a perfect atmosphere to kick back and relax in with a cocktail. When establishments are able to fully and safely reopen, it’s easy to see spending a few hours in the entry lounge area, or closer to the comfortable bar area, after a Grizzlies or 901 FC game. Right now, a few skeletal decorations are still hanging around, leftover from Halloween decorations. But instead of taking them down, King & Union has a few seated at tables (dressed in pilgrim hats and other Thanksgiving finery for the upcoming holiday) to demarcate social distancing guidelines. 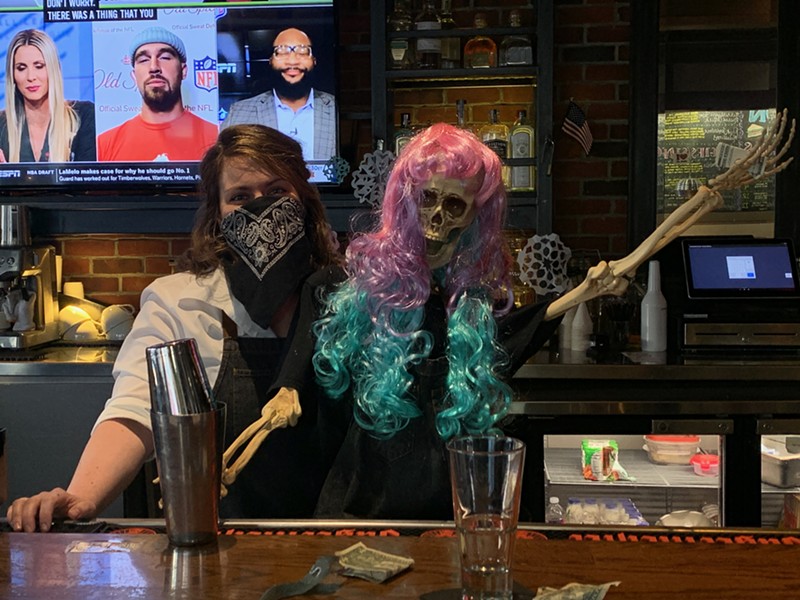 But as an extension of the DoubleTree hotel, Rossman wants the restaurant to be memorable for not just locals, but tourists. “We want to be a departure from your typical hotel restaurant,” he says. “A lot of them are forgettable, but we want to create an experience where people coming in from out of town can try something authentic to the area, and mix with people from Memphis.”


An exciting component, and the second half of the “Bar Grocery” moniker, is the store selling locally made, pure 901 goods. Think sweet and savory snacks, like Makeda’s Cookies, Shotwell candies, Wolf River Popcorn, or Vice & Virtue Coffee. Rossman wants to expand the grocery offerings over the next few months to offer standard household items like bread, milk, eggs, cheese, and pasta. “There's not a lot of places to get actual groceries Downtown,” says Rossman. “So we want to create a space where people come in, grab some essentials, and maybe some pimento cheese or some sliced meats. That’s the next thing we're looking at probably starting next year.”


While it’s been tough on both the restaurant and hospitality industries due to COVID-19, Rossman has seen a good reception Downtown. “We have a lot of people coming in, and guests are eating here multiple times during a stay,” he says. “And that’s what we wanted: both people from Memphis and folks who are visiting coming in and getting a taste of classic Southern cuisine.”