The moment foodies have been waiting for now can be announced: Dory, the new restaurant owned by chef Dave Krog and his wife, Amanda, is slated to open December 31st.

This is the much-anticipated restaurant at 716 West Brookhaven Circle.

“We’ve still got some things to do, but we’ve got all the furniture in here,” Amanda says. “Art is coming tomorrow.”

And, she says, “It’s real cozy in here. Warm. And it feels like there needs to be some bodies in here.”

The Krogs are pleased with the way the restaurant turned  out.  “A girl came in the other day and told me that what I told her my vision was, I achieved it,” Amanda says. “To mesh different styles together comfortably. He (Dave) likes sleek lines and very crisp. And I like other things. I like soft things and pretty things. And I like to see some things on the shelves.”

“She let me oversee construction and we designed this on the front end, the way the restaurant is laid out,” Dave says. “We picked out most of the furnishings together. And after all of that was done, I focused on the kitchen. Amanda came in and she picked all the paint colors. She picked out all the furniture. So, basically, the hard install was mutual and the decor was Amanda. And that’s how we got to meet in the middle.”

Amanda described the interior as “all natural earth tones.”

“The building is black outside,” Dave says. “It’s painted black with natural shutters.”

“Zach Shoe from Iron & Design did the rails on the porch,” Amanda says. And they kind of match when you walk in the building.”

He also did the louvered screen that separates the lounge area between the dining room and the bar. “This large metal art installation that's a screen and the beautiful hostess stand by Benji Camp are the first two things you see at the same time,” Amanda says.

The screen, Dave says, “looks like vertical blinds, but each one of the louvers coming  down are different sizes, ranging from five inches to two inches. It’s an amazing piece. It took a long time to build.”

And, he says, “Each louver moves independently. It weighs a ton. Raw steel.”

The large open kitchen takes up about 1,000 feet of the 3,700 foot building. “Our kitchen is almost as big as our dining room,” Dave says.

And, he says, “The kitchen is modern. I mean that there are no circles anywhere. It’s linear.” 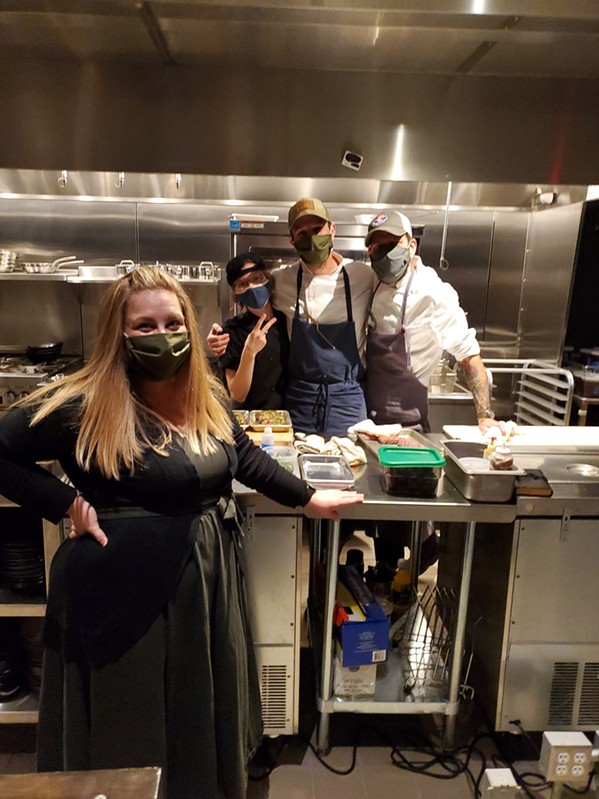 A lot of the decor, including the green rug in the lounge area, is reminiscent of the house she grew up in, Amanda says. “We had a green shag carpet. So, I just needed a little bit of childhood in here. I went shopping and came back with all this stuff.”

“It reminded me of my grandmother’s house, but in a good way,” Dave says.

Their chef de cuisine, Zach Thomason, said he “feels like he’s on the set of ‘Mad Men’ sometimes,” Amanda says.

The walls “are lighter in the dining room and darker in  the bar, but all kind of a gray-green color,” Amanda says. “It just made me feel good.”

The furniture in the lounge area is Mid-Century reproduction. “The couch is gold and the chairs are different textures,” she says. “The couch is like velour.”

The black granite bar seats eight in low-backed chairs. An antique tool box from an “an old electrician’s shop” was repurposed for the drink order pick up, Dave says.

“Normally, we’d seat 48 in the dining room, but because of COVID restrictions, we’re only seating 26 in the dining room. We also have a private dining room upstairs. We are not going to do overbook seating to begin with, but we are now booking parties and private parties for a minimum amount of people.”

She describes it as “just a room. We made that out to be more like a conference room feel. People  will use it for luncheons, work space.”

“And it has audio visual capabilities,” Dave says.

Their wine cellar, also designed by Schroeppel, is under the stairs. “It’s beautiful,” Dave says.  “It’s hidden. It holds about 280 bottles of wine. It’s also humidified.”

All the art for the restaurant has been carefully thought out. “We’ve had an opportunity to work with a lot of artists,” Dave says “Some are local, some as far as Atlanta. There are bowls and plates in the restaurant that were made by a potter in Clarksdale, Mississippi, Joey Young. John Dorian here in Memphis is working on our mugs and other plates for us.”

Dave looked for a year for the right type bowl for his fish dish, which he describes as a simple dish consisting of “fish and broth and local pea shoots.” But, he says, “Because there are only three things in it, they all have to be pretty good. All three of them. But I couldn’t find a bowl.”

He asked Young, “Will you make it for me?”

Young created the matte gray, wide cone-shaped bowl. “That led me to, I guess, get excited about having dishes and bowls that match the food going into it. I believe the vessel is important.”

Everything came together when they held a small private dinner recently for their landlords, Billy and Benjamin Orgel, and their guests. The Krogs felt like they were entertaining at home “That was the goal,” Amanda says. “To make people feel like they walked into our living room. Our dining room.”

As for the food, Dave says, “We’re Southern first. We’re almost 100 percent local farms on produce. So, Southern, definitely, but we are playing with some of the techniques here. I think the past few years personally I have grown more as a cook than I have in the past 10. Just because of having the opportunity to do our pop-ups (Gallery) and put whatever I want on the plate. Nobody was telling me what I should be cooking or even suggesting, for that matter.

“This was Amanda’s and my concept. So, I just cooked and I cooked what I wanted to and what I could get locally. And designed dishes around some modern technique here, but we still operate in classic French technique. Where I come from.”

The restaurant was named after Dave’s grandmother, Doris Marie Krog. “And then our daughter is Doris Marie Krog,” Amanda says. “If we got a dog we’d name it ‘Dory,’ too.”

Nichole Wages is the restaurant’s general manager. “One thing we knew, for sure, was that we wanted Nichole to be here with us,” Amanda says.

It’s taken time to get Dory open, but, Dave says, “We had enough time and we’re grateful in a lot of ways for having that time. For the year or so we were trying to find investors and trying to find a place, we had a lot of time and conversations at the house. That’s pretty much all we talked about. All the way from colors and textures and bowls to who are we getting the beans from.

“I would have never thought that I would be designing a restaurant. That Amanda and I would be building a restaurant instead of going into a space and remodeling it. This was a house first. Then an old office. And we gutted it and put all the things where we wanted them.

“The house really dictates where everything went. The building showed us the best spot for the kitchen, the bar, the dining room. Breaking walls out, adding beams, we were there with the engineers. We got to design it.

“For me, it’s hard to believe. It’s definitely been a dream come true. And a huge learning experience for both of us.”