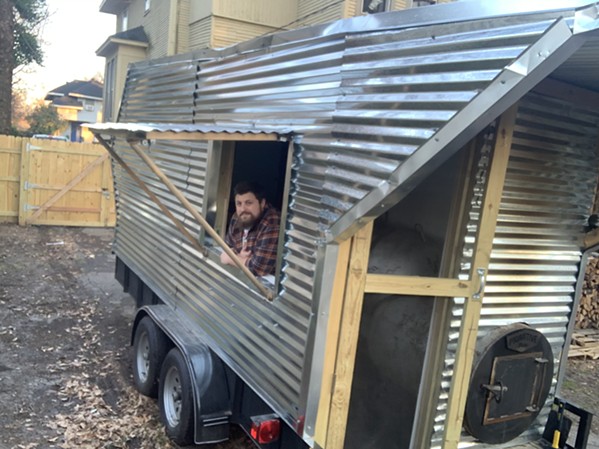 Get ready for the Bain BBQ food truck to roll into Midtown in early March.

“I’m from Texas, so it will be Texas craft barbecue,” says owner Bryant Bain. “But it does have a little Memphis influence.”

Bain, 30, who is from Louise, Texas, described the difference between the two ’cues. “Compared to Memphis barbecue, which is your dry-rub pork-centric, Texas barbecue, especially mine, is beef-based. So, the brisket is king when it comes to my barbecue.”

He also will sell Memphis-type barbecue, including ribs and pulled pork. “But I’ll focus more on beef and sausage and beef ribs.”

Bain began barbecuing when he was 12 years old. “I competition barbecued with my family. We had a giant rig and we’d go around Texas competing. I fell in love with it. I just love the smell of smoke and the patience it takes: 14, 16 hours to bring this tough cut of meat that, used to be, nobody wanted and turn it into something delectable.”

He seasons his brisket like he would a steak with just salt, pepper, and garlic. “My briskets are USDA prime. I don’t do anything lower than that.

That’s why his method of cooking is known as “craft barbecuing,” Bain says. “It’s going back to the original barbecue days when people would literally have a fire and slow-roast a piece of meat.”

Bain uses an “offset stick burner” to cook the meat. “There are two chambers. A big chamber — that’s your main chamber where you put your meat. And off to the side of it is a smaller chamber. That’s where the fire burns. On the opposite side is the chimney stack. It creates a draft and it pulls the heat and smoke across the meat.”

He uses “pure oak” to cook the meat. “I like the flavor best. Every type of wood gives you a different flavor. And, usually, you’ll cook with whatever is regionally available. Back in Texas, I cooked with post oak. Here, red and white oak. Some use hickory, some fruit woods like cherry, peach.”

Bain, who moved to Memphis six years ago, says, “It’s the best decision I ever made because I met my wife here. Heather Waldecker. She will be helping in the truck and her sister in law, who is going to move here this weekend, will be doing all the side dishes and desserts for me. Hannah Waldecker.”

Side dishes will be potato salad and a “combo vinegar/mayo-based” coleslaw, which, Bain says, “won’t be super vinegary. More of a mayo base, but not really thick.”

He also will serve a smoked macaroni and cheese. And “Texas pinto beans. “They’re not like the sweet barbecue beans you get here. They’re kind of like chili beans.”

Desserts will include caramel banana pudding and “a couple of different miniature pies. We’re going to be rotating. Chocolate pecan pie, Tennessee chess pie, and key lime pie are the three that are for sure.”

Bain loves Memphis. “I’ve never seen a community take such pride in itself than I have in Memphis: 901 Day. ‘Grit Grind.’ ‘It’s a Memphis Thing.’”

This will be his first food truck experience, says Bain, who works remotely as an IT manager for a Minneapolis company. He asked some friends who were moderators of the Memphis Sandwich Clique Facebook group if he could sell some of his barbecue plates. “Kind of get an idea if people like my style of barbecue. And it was a raging success.”

The outside of the trailer is built with “all sheet metal roofing, that kind of wavy metal. So, it looks like an old Airstream. This is actually a trailer I pull around with my truck.” 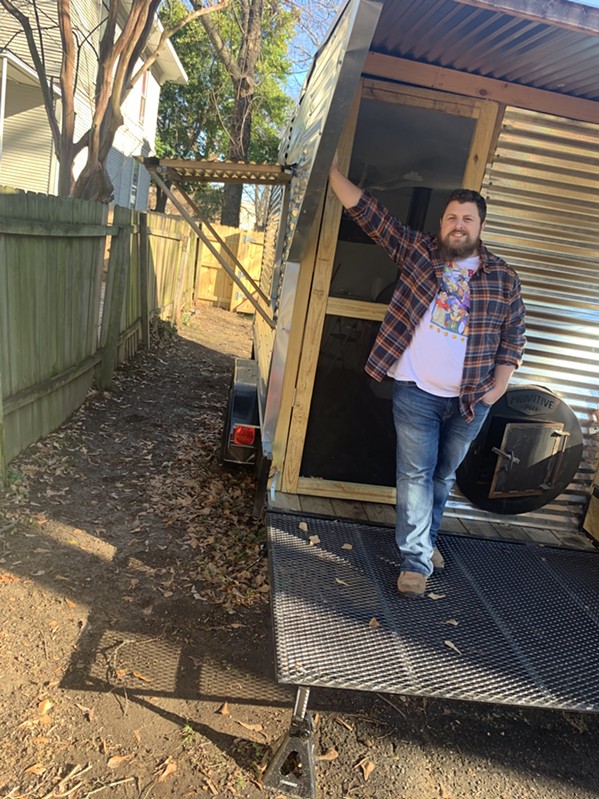 Bain doesn’t plan on stopping with his food truck; his future plans include opening a food truck park in Midtown. “We’re still in the very early talks.”

He’s already talked with Archimania architect firm about designing it. “It will be a food truck park/beer garden. People can get food from their favorite food truck, grab a beer, and just hang out.”

Bain will have his food truck permanently set up at the park. “The way I do my cooking, it’s hard to move my trailer around because I have to have the fire going 24/7.”