And get ready for a new dining concept in Memphis.

Unlike other restaurants, you don’t get a menu with a lot of options to mull over. Each menu, with the exception of  occasional subtle changes, will basically be the same for three weeks.

But you won’t be given a menu when you sit down. “We’re not putting out the menu to the people before they come,” says Amanda Krog, co-owner with her husband, chef David Krog. “They come in, sit down, they eat. We’ll honor dietary restrictions as long as we know in advance.

They will have wine pairings available at some point, Amanda says.

“We have wine by the bottle right now,” David says. “And into our grand opening month we will have a full bar and all that good stuff.”

The dinners, which are $95 each, will be similar to those Amanda and David held at their Gallery pop-up series. “We have this background, this history of tasting pop ups and doing that,” Amanda says. “ We thought ‘We’ll use that experience and do it here.’ First, we thought, ‘This is what we’re doing for a time.’ But, man, once we’ve gotten in there and got in that building, sat people down, it felt good and people are responding to it. And it’s just the way it’s going to be.”

“I’ve done a bunch of them,” David says. “In the dining rooms I was in charge of I’ve always done some sort of a tasting menu just between friends or people who came in and were indecisive. It’s something I’ve been passionate about my entire career.”

Dory is “the first 100 percent tasting menu restaurant in Memphis,” David says. “We think in the Memphis market, for whatever reason, it is time for us to do this. It’s time for Memphis to have an amenity like this.”

“We’ve had a couple of people that have already been in three times,” Amanda says. “They’ve eaten the same thing. It might be a tiny little tweak on something or, ‘Let’s change this out.’”

The menu could be “totally different at the beginning of the run than it is at the end. I’m sure David will be making several subtle changes.”

But the menu will completely change every three weeks. They are asking diners to trust them with a dinner with nine courses, including the amuse-bouche, the sorbet, and the mignardise (a bite size dessert).

“We have an incredible kitchen staff,” David says. “There are three other humans in that kitchen with me who are brilliant in their own right. These young people are sharp. So,  I am in the position now in my own kitchen to just throw out concepts: ‘Hey, this is what is all in my brain.’ And we work through it together. 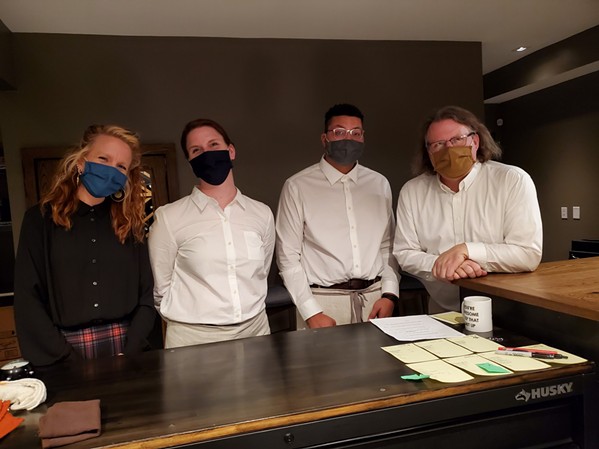 “I’ve been writing menus for 30 years. This gives me an opportunity to add other people’s visions into the concepts that I have come up with. And it’s beautiful. It’s just a cool process. It’s an amazing way to teach and learn at the same time.”

Dory’s cooks and chefs will execute a special four-course surprise tasting menu that will change weekly for $55 on Monday nights. “A completely different menu that the sous chef and the rest of our staff are writing on their own, with very little oversight from me,” David says. “I want them to create a menu they’re proud of on Monday nights.”

“Most of our restaurant people can’t do a middle of the week or a weekend ’cause they’re working,” David says. “So, Monday nights are usually chefs’ and cooks’ days off. This gives a great reason to come spend it with us.”

“The details are everything" at Dory, David says. "The wine list is constantly moving and the dishes are constantly evolving, the service is refining. Every little thing we’re doing every single day there is to try to be the best that we can possible be.”

That goes for the paintings on the wall. “March 20th is the first day of spring,” Amanda says. “And Anna Holt is bringing all her pretty flowers to hang on the dining room wall,”

They will move Shelley Fleishman’s paintings, which currently are in the dining room, to the bar and lounge area. “The dining room will be bursting with flowers in the spring.”

Beginning Feb. 27th, you can book a reservation for Dory at dorymemphis.com.