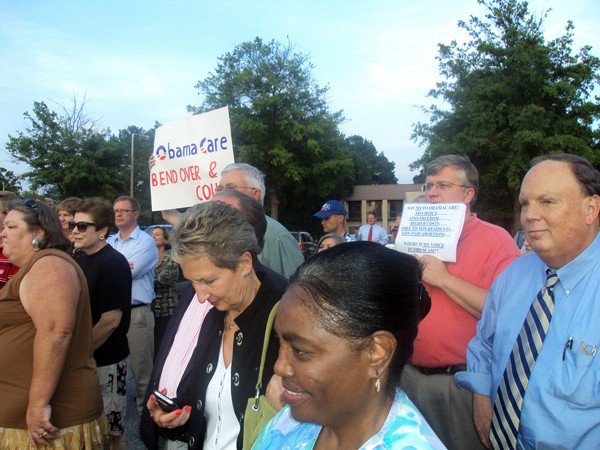 On the eve of a 9th District congressman Steve Cohen's Saturday Town Hall meeting on health-care legislation at the Bridges Center downtown, Tea Party protesters rallied Thursday night in Germantown and made plans to show up at the planned informational session en masse.

The TeaPartier meeting, an overflow from a scheduled Town Hall meeting held by 7th District congressman Marsha Blackburn, an opponent of the bill now shaping up in Congress, was conducted on the parking lot adjoining the Macaroni Grill, where Blackburn's meeting had been originally scheduled. 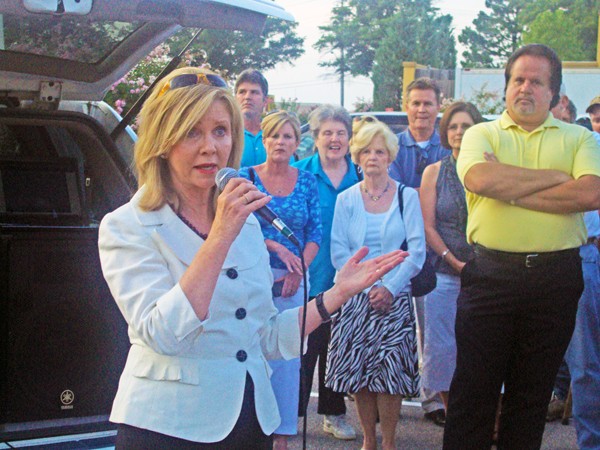 Simultaneous with the organized TeaPartier effort, health-care supporters made their own plans to attend the Cohen Town Hall. Members of the Mid-South Peace & Justice Center, among others, prepared to counter what they foresaw as the ' TeaPartiers' planned disruption, part of a pattern of national protests, and held organizational meetings for the purpose.

A spokesperson for Cohen said the congressman himself was fully aware of the imminent convergence of forces and was determined to to get the message out about the pending health-care legislation.

The Flyer will provide pictures and coverage of the Saturday morning event.

UPDATE NOTE: Even before an additional story providing the promised coverage of Saturday's Town Hall event goes up — as it will later Saturday — it is worth noting that the term "TeaBagger" is essentially a self-description of the conservative populists who began these protests of Obama administration programs several weeks ago.

Indeed, "TeaBag parties" as a phenomenon entered the political lexicon at the behest of the protesters themselves. It obviously derives from the "Tea Parties" held by American patriots in protest of British tax policies before the Revolutionary War.

Given that fact, it is passing strange and beyond thin-skinned for several commenters here to belabor the fact that the term is used generically in this brief article.

It is certainly gratifying, though, that so many people have beeen moved to read the article so as to comment on it one way or another. — JB

UPDATE of UPDATE. Seems I was mistaken. As I tried to explain to some of the unforgiving complainants below, I'm too much of a shut-in and mope to have grasped the apparent sexual metaphor and (therefore) insult in the term "teabagger." "Tea Partier" it is. No offense intended. Honest. A thousand pardons and mercy on me.

ONE MORE UPDATE: Given the fact that so many Tea Partiers slammed away here at my innocent if ignorant original usage of the term “TeaBaggers” to describe them (since corrected), this note from an authentic Shelby County conservative and patriot sheds some light on the recent history of that term as applied to health-care protesters.