I was waiting to talk with Shelby County Commissioner Henri Brooks after Wednesday’s special meeting in commission chambers to deal with builder Harold Buehler’s bid for 140 lots to develop for rental housing in inner-city Memphis.

Brooks, who had been on the losing end of the commission’s final vote — 7 to 4 in favor of Buehler —- was nevertheless being congratulated for her frustrated efforts to derail Buehler by a group of her constituents and supporters, and she advised me to “hold up for a minute” while she dealt with them.

Essentially, her support group was working out on the theme of “respect” — something they believed Brooks had been denied in the course of the two-and-a-half-hour meeting just concluded. They assured her that she was fully deserving of their respect, and, in return, she reassured them that “this will come up again Monday at 1:30.”

Huh?, I thought — because, even though this meeting, downstairs in commission chambers, had been held on Wednesday, committee day for the commission, it essentially was a continuation of last Monday’s regularly scheduled meeting. A vote on the Buehler matter had been delayed then, mainly because Brooks had cited a provision of the 1981 law enabling the state Homestead Act which called for available lots to be publicly advertised — a step which the commission had either skipped or overlooked.

That oversight had since been corrected by publishing notices in several media outlets, and Wednesday’s meeting had been called to complete action on the matter before pending deadlines on available state and federal authorization and funding could expire.

Brooks, however, persisted in believing that Wednesday’s meeting had been merely “a special hearing.” Her interpretation of other events was equally idiosyncratic. When she paused momentarily in her conversation with her supporters, I asked her about the obvious tension between herself and commission chair Joyce Avery, who several times had attempted to enforce limits on Brooks’ speaking time so a vote could be called.

“There was no friction,” Brooks maintained.

Had the two not audibly snapped at each other back and forth?

I asked Brooks if she thought, as her constituents nearby clearly did, that she’d been disrespected. She deferred to them again and one woman responded. “These people work for us. The people!” she said, “these people” being the commission, and she went on at some length about how she, as an audience member, had wanted to speak for three minutes and had only been allowed to speak for one.

“One minute” per audience speaker had been a rule established by Avery on the front end of Wednesday’s meeting.

I asked Brooks if the chairman didn’t have the prerogative to set rules for discussion, especially if they were clearly enunciated in advance, as they had been Wednesday.

As she was meditating on an answer, Omari Fleming of WREG, News Channel 3, began trying to affix a mini-mike to Brooks’ lapel.

She suddenly barked out: “Excuse me, you can’t touch me without asking me!”

“I apologize,” a stunned Fleming responded.

Brooks remained unforgiving. “You ask before you do that!” she said.

“I didn’t mean to touch you,” the contrite reporter said, trying to explain that all he meant to do, as unobtrusively as possible, was to attach the mike so as to expedite what he intended as a forthcoming interview.

“But you didn’t say a word to me.,” Brooks retorted.

“Because you were talking to somebody. I didn’t want to…”

“You were just sticking that microphone…” Brooks began. But by this time, Fleming waved off and began politely backing away, clearly changing his mind about wanting an interview.

I took advantage of the caesura and resumed. “Does the chairman not have the right to articulate procedures and then require members to adhere to them?” I asked again.

“We have rules. She said I had 10 minutes…,” Brooks began, and she was off again on her version of events, whereby the commission chairperson had somehow “misheard” the fact that she had something to say and somehow overlooked the amount of time that she, Brooks, had to say it in.

In this scenario it was Avery who had ignored the rules, not herself, and to the extent that someone had been disrespected in their exchanges, it was she, not Avery, who had been. Add to this the fact that Brooks persisted in believing that Wednesday’s special meeting, climactic vote and all, had been but a run-through on the issue, with a follow-through and another vote to be held on Monday.

It is surely no stretch to say that, on all these matters, she differed with other members of the commission, certainly with the consensus of the body. Whatever she might have thought, Wednesday’s vote, which granted Buehler title on the 140 lots he sought, on condition that he paid up almost $1 million in back property taxes by the end of 2010, appeared to be binding.

And the flare-up with Channel 3’s Fleming seemed puzzling indeed. No reporter had been more faithful in reporting the views of Brooks and her supporters in the last few weeks, during which the Buehler matter, once regarded as routine, became the focus of a raging controversy. WREG has made a point of including background information on Buehler on its website, and Norm Brewer, the station’s veteran commentator, had taken the builder to task more than once on the matter of the unpaid taxes.

The meeting had begun with Brooks insisting that she be allowed to speak on “a point of personal privilege.” Permitted to do so, she went to the commission dock and launched into a philippic against an organized picketing Tuesday of her South Bluffs townhouse.

Picketers organized by Buehler aide David Upton had stood on the pavement on the other side of a fence bracketing Brooks’ domicile and others and carried signs praising Buehler for providing rental homes in the inner city and noting that Brooks herself lived in rental property, albeit a plusher variety.

In the course of a sometimes distraught monologue, Brooks said she considered the picketing to have been a “threat to my family,” and, looking straight at both Buehler (whom she labeled “a parasite and a predator”) and at Upton, who sat nearby, warned them against a further demonstration near her home. “I promise you my retort will not be pretty,” she said.

At various points in Brooks’ somewhat rambling discourse, chairman Avery tried to interrupt, telling her she had exceeded her time limit. Brooks would respond by saying, “I am not finished.” Alternately: “I have something to say.”

She would repeat variations of that phrase during later debate on the Buehler matter whenever Avery tried to enforce time limits, attempting to throw responsibility for the overrun back on Avery. “You’re talking,” she would say, as if it were the chairman, not herself, who was holding back a floor vote.

“We wil vote,” Avery said firmly at one point, but was forced to wait indefinitely while Brooks kept on speaking. Just before a vote was finally called at the very end of proceedings, Brooks was attempting to question county attorney Brian Kuhn on a series of issues having to do with legal aspects of the state Homestead Act, under the terms of which the 140 lots sought by Buehler were made available.

The weight of testimony Wednesday was clearly in Buehler’s favor.

Memphis Mayor Pro Tem Myron Lowery spoke before the commission on the premise that it would be folly not to develop the vacant lots Buehler sought title over (140 out of some 3,000 in the inner city, including many that were the result of arson and neglect). Antonio Burks, the former Memphis Tigers basketball star who was recently wounded by gunfire, showed up on crutches to extol Buehler for having provided Burks’ mother a rental home for the past decade.

Even a Klondike resident who had been featured in The Commercial Appeal as opposing Buehler rental property on style points was shown in a Buehler-produced video extolling the builder for having arrived at new designs. (Both the video and several posterboard displays of previous Buehler properties were stage-managed by Upton.)

Buehler opponents got up to speak, too, including one man who said,” We need to do a background check on this criminal.”

Besides Brooks, overt opposition on the commission itself was limited to another longtime critic of the builder, Mike Ritz, who succeeded in adding an amendment to Commissioner Steve Mulroy’s enabling resolution, one that required full repayment of Buehler’s delinquent taxes. Another Ritz amendment, which would have mandated approval of Buehler designs by community development organizations in all affected areas, was rejected.

In any case, Wednesday’s apparently definitive vote notwithstanding, Brooks announced that she intended to soldier on. “I’ve just begun to fight,” she said — though how and with what allies and to what end remained to be seen. 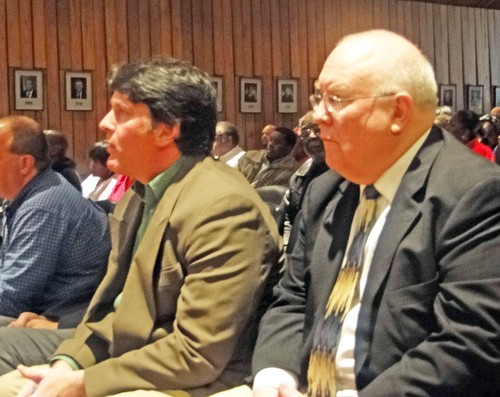