On both of the previous occasions that Harold Ford Jr. let it be known that he was considering a U.S. Senate race, he let speculation build for months before saying no in one case (the 2000 election cycle) and yes in another (for the 2006 race he did make)

Both those circumstances were in Tennessee. Ford has now said no in New York and without wasting more than a few weeks in doing so. He had indicated March as the time that he would give an answer to New York Democrats — both those who wanted him to run and those who didn’t, and there were many in both camps.

On March 1 Ford gave his answer, as reported in the New York Times.

All in all, Ford had spent not quite two months in the bubble. Soon after the New Year he had indicated his interest in challenging incumbent Democrat Kirsten E. Gillibrand for the seat once held by Hillary Clinton, and that announcement had come not quite ten months after he had apparently considered running for governor of Tennessee — ruling that race out only in March of last year.

Ford was backed by numerous influential New Yorkers, Democratic and otherwise — his most prominent supporter in the political world being New York mayor Michael Bloomberg, an independent. He also had some key donors lined up, many from Wall Street and other financial sectors.

But the onetime Memphis congressman also had met with serious resistance — much of it coming from U.S. Senator Charles Schumer and other members of the Democratic establishment in New York and Washington.

As interest mounted concerning his intentions, Ford embarked on a “listening tour” of the Empire State. Simultaneously, numerous articles appeared in both the New York and national media questioning Ford’s apparent turnabouts — from the conservative to the liberal — on issues like abortion and same-sex marriage. (A case in point was the boisterous reception given Ford — verbally abusive and even including an exploding paper bomb — at a meeting of the Stonewall Democrats in New York. SEE THE VIDEO.)

In recent weeks also, Ford had come under challenge as a probable recipient of a lucrative bonus in his role as a vice chairman of the Merrill Lynch division of Bank of America. This was a situation first publicly noted in a Flyer article of February 2009. 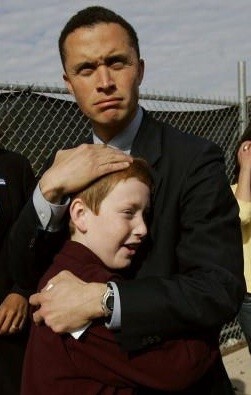 Rumored to be salaried in the neighborhood of $3 million annually for his work as a rainmaker, Ford was thought to have received a bonus in an equivalent range at the end of 2007, when Merrill Lynch, whose absorption by BOA was significantly financed by the taxpayers, paid its executives the add-on stipends.

Subsequently New York Attorney General Andrew Cuomo questioned the bonuses and has sued to have the list of payouts made public.

Ford’s involvement with Merrill Lynch/BOA was one of the factors, along with his marriage to native New Yorker Emily Threlkeld, that apparently had led him to think of himself as a New York resident. Ford, who maintained multiple addresses, in New York, D.C. and Tennessee, had not yet paid New York State income taxes, but his spokesman indicated recently that Ford intended to complete a state tax filing this year.

Ford will apparently resume his relationship with MSNBC and NBC as a political analyst. In a sense, he had never left that job. He appeared on “Meet the Press” as an analyst only two Sundays ago, discussing political events at large-- including his own interest in the New York Senate race.

Ford, who serves as national chairman of the right/centrist Democratic Leadership Council, also offered an explanation for his decision not to run in an op-ed piece for the Times, which had covered his shadow campaign in great depth.

After several paragraphs in which he outlined the case for his running -- a need for "change" being central to that possibility -- Ford got to the meat of his decision not to run:

"...I’ve examined this race in every possible way, and I keep returning to the same fundamental conclusion: If I run, the likely result would be a brutal and highly negative Democratic primary — a primary where the winner emerges weakened and the Republican strengthened.

I refuse to do anything that would help Republicans win a Senate seat in New York, and give the Senate majority to the Republicans.

I realize this announcement will surprise many people who assumed I was running. I reached this decision only in the last few days — as I considered what a primary campaign, even with the victory I saw as fully achievable, would have done to the Democratic Party.

I am a Democrat. But I am an independent Democrat. I am not going to stop speaking out on behalf of policies that I think are right — regardless of ideology, party or political expediency. I plan to continue taking this message across our state and across our nation.