A Mississippi Populist Takes His Gubernatorial Campaign to Memphis 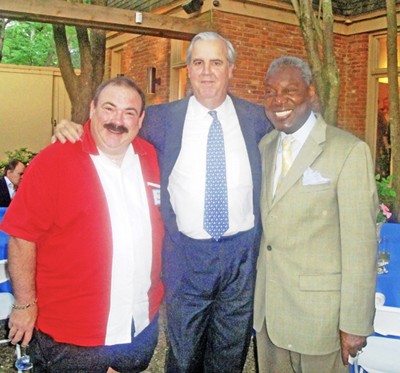 Local Democrats, who often lament the increasing number of their party brethren who seem to prefer cautious, even Republican-style rhetoric to the old-fashioned yellow-dog Democratic kind, should say hello to Bill Luckett.

Luckett, a successful lawyer and businessman, is running for governor on the premise that the state should “help people, with hands up, not hands out.” He thought the recently enacted federal health-care bill had “flaws” but was something “we had to have.” He is determined to try to reverse an historically “disastrous” poverty rate, and is even willing to acknowledge that “we need some alternative revenue streams.”

Democrats who like that kind of talk (and there’s more where that came from) should take note, however: Luckett is indulging in it, not here in Tennessee, but south of the state line. He is running for governor in, of all places, Mississippi.

The Mississippi Democrat was in Memphis Thursday evening for a well-attended fundraiser in his honor in east Memphis. Though he makes his home in Clarksdale, he is something of an honorary Memphian himself, having operated a law firm here — Luckett, Pinstein, and Ritter — until recently, when he shut it down to focus on his Mississippi efforts.

He has a Mississippi law firm, too — Luckett and Tyner, based in Clarksdale. He also owns a number of other enterprises down that way — the Ground Zero Blues Club, the Madidi Restaurant (“It’s on the cover of Spoon Magazine right now in every hotel room in Memphis”), BMT Properties, Rent-a-Plane LLC, and Delta Greenpower. (He is a partner in some of these businesses with fellow Mississippian Morgan Freeman, the movie actor.)

Luckett appropriates one sentiment from a previous Mississippi governor, Kirk Fordyce, who once boasted that, unlike an opponent, he was used to signing the fronts of checks, as well as the backs of them.

But that’s about all the rhetoric he cares to borrow from the late Fordice or any other Republican. “I shudder to think that we might get another Republican governor,” he says. “I’m really worried we’re going to step backwards in time and not progress forward.”

Mississippi is a state where “70 percent are carrying the other 30 percent,” Luckett says. “We’re the poorest state, and the Delta, where I’m from, is the poorest part of the poorest state. We’re last in education and first in poverty. It’s intractable, It’s been that way for 60, 70, 80 years. We’ve got to break the cycle of poverty.”

Luckett’s race for governor is his first run for political office, and it won’t become official until the first of next year, when candidates will be allowed to qualify under Mississippi state law.

“I’m making this one try. I’m not a career politician,” he says. He offers a philosophy of government that, he says, derives from sources as diverse as Friedrich Hayek, the late conservative economist, and Paul Krugman, the still thriving liberal one: “There are certain risks in life that ought to be shared by everybody. You can’t protect yourself against catastrophe unless all share for the common good.”

And, in pursuit of that “common good,” Luckett knows his throwback populist campaign will have to run somewhat against the grain. “I hope to get white vote, black vote, Republicans, Democrats, Green, and everybody in between. I’m going to need that.”