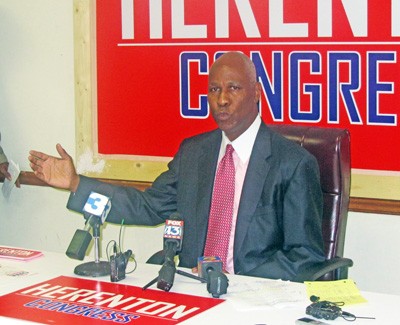 The last time former mayor Willie Herenton met with the assembled media in his South Third St. congressional campaign headquarters, he let that “free for all” sprawl for all of an hour and a half and answered every question under the sun.

On Tuesday, a good month later, the only subject the media wanted to hear about, and the only one Herenton dealt with, was the out-of-the-blue announcement from the camp of incumbent 9th District congressman Steve Cohen of his endorsement for reelection by President Obama.

Given the general perception (disputed by Herenton and his supporters) that Cohen already had a commanding lead in the congressional race, that Herenton’s main campaign pitch has been an appeal to black voters to elect one of their own to Congress, and that Obama is very likely the most important African-American icon in American history, advance speculation in the media had been genuine wonder as to how Herenton could possibly spin Tuesday’s stunning development to his own benefit.

All things considered, Herenton did a reasonably good job of walking that tightrope, though he teetered dangerously from time to time on the brink of intemperate or impolitic remarks.

His basic approach was, first, to note that he disbelieved in the appropriateness or value of candidate endorsements; next, that he respected, even loved, President Obama, but doubted the value of his endorsement of Cohen — especially since the decision on a 9th District congressman would be made locally, by the district’s voters, not by “Washington, D.C.. or Chicago” and, finally, that the very fact that Cohen had sought an endorsement from the president signaled a “desperation” on the congressman’s part, an awareness, Herenton insisted, that “80 percent, minimum” of the black vote was committed to himself, along with a minimum of 5 percent of the white vote.

That no extant poll suggests anything like those figures did not faze the former mayor, who made a point of saying that he distrusted any information that came from the media — even Tuesday’s report of the Obama endorsement.

Herenton maintained that, on hearing news of the endorsement, he had turned to his close friend and campaign manager, Shelby County Commissioner Sidney Chism (who stood nearby throughout the 30-minute press conference) and said,” Sidney, this is a great day…They now know what you and I know,” then repeating the vote estimates suggesting he was far ahead of Cohen.

The former mayor strove mightily to avoid negative comments about Obama but was not entirely successful.

“Most recent polls reveal, 6 out of every 10 Americans feel that our country is moving in the wrong direction,” Herenton said, “As much as I admire the Obama administration, they’ve not moved this nation forward.”

Herenton noted the president’s “declining” popularity and at one point attempted to minimize the significance of the Cohen endorsement by saying, “Mr. Obama has got to look hard and long to really know where Memphis, Tennessee, is.”

The Cohen camp had “rolled the dice” in seeking Obama’s endorsement, Herenton said. “In many cases, where the President has recommended people, they lost. This strategy could cause many Republican voters and people who anti-Obama to join the Herenton coalition.”

As if to further such a prospect, Herenton characterized himself as “more of an independent thinker, not as much to the left as Steve Cohen.” He said, “Cohen has been loyal to the Democratic agenda, I think, almost 100 percent,” while he himself was “more moderate, in the middle.”

He imagined a scenario whereby Cohen had beseeched the president for an endorsement by saying, “‘I’ve been there for you. I’m in trouble in Memphis…I need your help.”

Herenton, who began the press conference by noting it had begun promptly at 3 o’clock, “not CP time but accurate time,” ended with this observation: “Cohen’s a phony. He will use any antic, any tactic to get reelected. He knows we’re the only people on the face of the earth that will allow anybody to lead us.”