Luttrell Gets Clean Win Over Ford 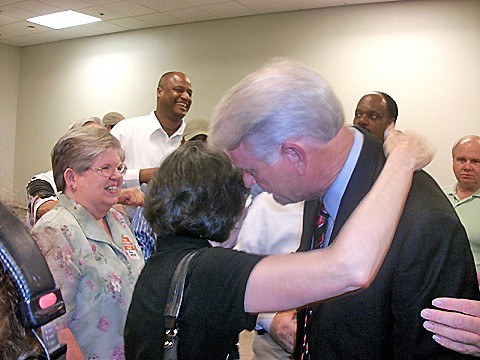 As Mark Luttrell began to address his supporters following his win in the County Mayor’s race, a surprising set of words came out. Clean. Issue Driven. Respect.

As the cleanest high-profile campaign came to a close, it was no surprise that both sides were as gracious to each other as they had been during the campaign trail. After it became apparent that Interim Mayor Joe Ford would not surpass the 58 to 42 percent margin that had held for most of the evening, Ford called Mayor-elect Luttrell around 9 PM to concede the race, and offer his assistance as the county government changes hands. As both men took the stage after the call, the first words spoken had the same message. Honest, issue driven campaigning.

“We tried to stay away from personalities and focus on issues,” Luttrell said. “I thank Mayor Ford for running that type of campaign.”

It certainly was a change in the middle of an election that featured the rhetoric of Willie Herenton, Charlotte Bergman’s billboards, and the increasingly ugly mudslinging done by Bill Haslam and Zach Wamp.

Although there was a late charge from some Democrats to try and label Luttrell as a right-wing Republican, bitterness was not in the cards for this race. Long before the results came in, a Ford supporter who asked not to be named described Luttrell as a “good man,” and even after the results, Ford and his supporters left with the heads in the air.

“We ran a perfect administration and I have nothing to be ashamed of,” said Ford. “I can stand here tonight and feel pretty darn good.”

Keeping with the theme of the night, most of Luttrell’s comments following his victory revolved around what he hoped to accomplish in office.

“The first priority is to get a good handle on the efficiency of county government,” Luttrell said, “and make sure we’re moving progressively to get county government on a sound foundation.”

Ford’s party at the Hilton was quite swank, with Ballons, a Jazz duet, a massive projection screen and nice tables. Cash Bar. Food was minimal: meatballs and cheese.

Luttrell’s event felt more like an indoor fourth of July picnic, with community center tables, popcorn, nachos, cupcakes, cookies and lemonade. Entertainment was a country/blues band that featured a confederate flag bass guitar. When I pointed the guitar out to Luttrell he responded: “Good Grief. Please don’t hold that against me.”

Everyone in attendance was in agreement that the best food was at… Bill Oldham’s campaign headquarters two doors down from Luttrell.