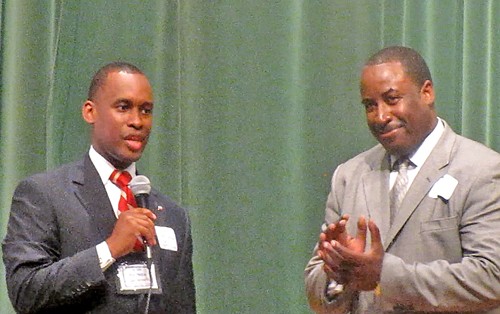 Thanks largely to a well-organized advance effort by his supporters, Turner was able to overcome the effects of a dismal election cycle for Democrats in 2010 and to turn away potential opposition. Though Shelby County Commissioner Justin Ford had considered running for the party office, and lawyer Curtis Johnson had in the previous week circulated a letter to party cadres seeking their backing, Turner turned out to be the only candidate nominated by the 38 members of a newly elected Democratic executive committee.

In brief acceptance remarks, Turner called for party unity and noted pointedly that the executive committee’s size, predicated on the local Democratic turnout in the2010 statewide election cycle, had shrunk from the 83 members authorized by the previous cycle, the 2008 presidential election year in which presidential candidate Barack Obama had drawn a strong Shelby County vote.

Democrats not only lost statewide in 2010, the party’s candidates on the Shelby County general election ballot had lost to their Republican opponents despite having a numerical majority on paper. (It should be noted that, though a court challenge to the 2010 county results proved futile, strong sentiment still exists among local Democrats, including Turner, concerning what they regard as possible irregularities in the voting.)

Itemizing the races on the 2012 general election ballot, including various Democratic incumbencies and one race — for District Attorney General — that Democrats had not yet won, Turner urged a strong party turnout. Forecasting problems for the party’s statewide candidates resulting from reapportionment after the 2010 census, Turner warned, “The word that I’ve got is that they’re probably going to try to eliminate a few of our House districts and maybe try to run some of our current state reps against each other.”

Taking the long view, Turner said, “We’re going to have to come back in the next 10 years, when they do the census, and get those lines back right….We’ve got a lot of work to do. We know the tide changes, and it’s going to eventually come back around, and it’s going to be our time.”