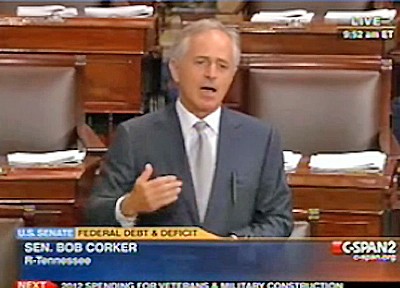 U.S. Senator Bob Corker (R-TN) has fairly consistently demonstrated during his five years in Washington thus far that he is not bashful about taking the lead in controversial matters — be they foreign or domestic.

An example of the former is his aggressive insistence, early on, that the United States distance itself from involvement with Pakistan and begin to disengage from Afghanistan. An example of the latter is his sponsorshi9p of the CAP bill to impose a statutory annual limit on federal spending.

And, while he is generally content to work within the context of Republican Party guidelines, Corker had evinced a willingness to break with his party’s leadership if he feels strongly about an issue.

Such an issue, evidently, is the current game of chicken going on in Congress regarding the pending vote over increased the nation’s debt ceiling. With time running out before August 2, which Treasury Secretary Timothy Geithner regards as a drop-dead date for the debt-ceiling vote, the GOP leadership has made it clear that it doesn’t intend to relent on voting to raise the ceiling without specific major concessions on spending (sans taxes) from the White House.

And the Senator used unusually tough words to describe his frustration with the senators in both parties who are locked into intractable positions. “Basically, most senators in this body are nothing but two-bit pawns, two-bit pawns, as a political fight is under way, basically, to lay out the groundwork, if you will, for 2012 elections. I mean that’s what really happening in this body right now, and I think we all know that.”

Corker blamed the current predicament on the fact that “this body hasn’t passed a budget in 806 or -7 days, “ adding, “And I credit both sides for that….Yesterday, we voted to move to a spending bill, where we are in essence acting as accomplices to this…Anybody who votes to go to a spending bill without forcing the United State Senate to come to terms with a budget is in essence an accomplice to allowing the shenanigans that are taking place right now to continue.”