"In So Many Words or Less?": City Council Decrees Less 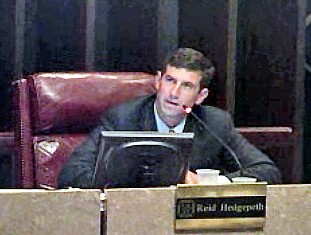 Considering all the attention that has been paid to the last several meetings of the Memphis City Council, it would seem impossible that fundamental changes in the Council’s procedures, which have to be voted on, could escape public notice.

But such was the case last Tuesday in the wake of the two main items on the Council agenda: disposition of city employees’ demand to revoke a 4.6-percent paycut contained in the current year’s budget (resolution of which was put off for at least 30 days); and the formal signing off on the Memphis City Schools budget and approval of a $78.5 million payment to MCS for the 2011-12 academic year.

Though the auditorium would fairly rapidly empty out upon the completion of action on these two issues, there were other items left to be discussed — some of which drew extended commentary from Council members.

Two other factors began to loom large. One was the fact that Tuesday night had been designated as “National Night Out” for Council members, an occasion for holding meetings out in their districts or otherwise dealing with constituents.

Another factor was that several items (importantly, the schools matter) required the kind of immediate implementation that needed the Council’s ratification by a procedure called “same-night minutes” — i.e., formal approval of the minutes on the night of the action rather than the customary two weeks later. And approval of “same-night minutes,” like the customary delayed kind, required a Council quorum of seven members.

The problem was that, for reasons of National Night Out or whatever, Council members began to leak out, endangering prospects for keeping a quorum. When the number of Council members got down to the bare minimum of seven, a few members began to resent that the entire burden of holding the fort — and thereby keeping things legal — had been left to them.

In the aftermath of it all, some of the stick-it-out seven would cite two Council members, who had spoken at length concerning their objections to the proposed handling of a Community Redevelopment Plan for the Greenlaw Community Center, then left the stage and the auditorium. The two members were Wanda Halbert and Joe Brown, the latter of whom has made one of his rhetorical catch-phrases, “in so many words or less,” famous in the course of many Council debates.

Later on, as the Council neared the end of its agenda, Councilman Ed Ford asked to speak regarding “a point of personal privilege.” The point turned out to be a complaint about the departed members. Said Ford: “I’m going to say this because I’m not going to bite my tongue. We should have more than seven council members here, and I really don’t appreciate it when our quorum cold be imperiled….Nobody’s better than the next person and if somebody cannot do that job they may need to step aside.”

Council chairman Myron Lowery seemed to agree and took something of a mea culpa: “If an individual goes on and on the chair should bring him in…Perhaps I should do a better job of reining him in.” Lowery would go on to say he understood the “frustration with members who spoke for long periods of time tonight and then left, leaving those of us here to complete the work of the Council.”

The chairman also made a point of noting that “we control our own rules.” After Councilman Harold Collins added his amen to what Ford had said, applying it further to absenteeism at committee meetings, Councilman Reid Hedgepeth responded to Lowery’s reminder concerning the Council’s prerogatives.

Somewhat unexpectedly, he moved as follows: “that each council member has five minutes to speak on an issue.” Upon Lowery‘s request for clarification, Hedgepeth said he meant for that stricture to co-exist with a standing restriction disallowing more than three comments on an issue by any given Council member. Councilman Jim Strickland seconded the motion, which would pass unanimously on a vote by the remaining members, who had meanwhile increased their number to eight — Lowery, Ford, Hedgepeth, Strickland, Collins, Berlin Boyd, Bill Boyd, and Shea Flinn.

Hedgepeth, normally somewhat taciturn himself, noted, “I think we will very rarely have to hit a stopwatch on this. We’ll know the times.” And he declined to ask for a “same-nights minutes” vote on his resolution, inviting input from the missing members on the occasion of the Council’s next meeting in two weeks’ time — said input presumably to be stated in integers of five minutes or less.