A day after the sanctioning by federal Judge Hardy Mays of a Memorandum of Understanding binding the several litigating parties in the school-merger case, the two school systems about to become one — Shelby County Schools and Memphis City Schools — took their first concrete steps toward union.

First up was SCS, which, in that body’s typically brisk manner, ran through a standard administrative agenda, then voted to accept the MOU with only modest misgivings expressed by Bartlett board member David Reaves. But he and the others signed on to the concept of unity, extending kudos to Judge Mays in the process and even indulging in some quiet praise for their opposite numbers at MCS.

At SCS chairman David Pickler’s suggestion, the board members agreed to submit to Pickler by Monday three names each of prospects for the Board’s five nominees to serve on the 21-member advisory committee established by the Norris-Todd legislation which serves as an enabling umbrella for the merger process.

As Judge Mays clarified the terms of Norris-Todd, the advisory committee is empowered only to make non-binding recommendations to the new all-county board that, in interim form, will come into being on October 1, composed of the current 9 MCS board members, the current 7 SCS members, and 7 additional members to be appointed by the Shelby County Commission.

The advisory committee also will have members appointed by the MCS board, by Shelby County Mayor Mark Luttrell, by Governor Bill Haslam, and by Ron Ramsey and Beth Harwell, Speakers of the state Senate and state House, respectively.

Later in the afternoon the Memphis City Schools board met, also approved the Memorandum of Understanding, and went ahead and certified the five MCS nominees for the advisory committee. They are: Fred Johnson, longtime educator and former SCS Board member; Barbara Prescott, former MCS Board member; Kenya Bradshaw, director of Stand for Children; Reginald Green, a professor of education at the University of Memphis; and Daniel Kiel, law professor at UM and lecturer on local education issues. 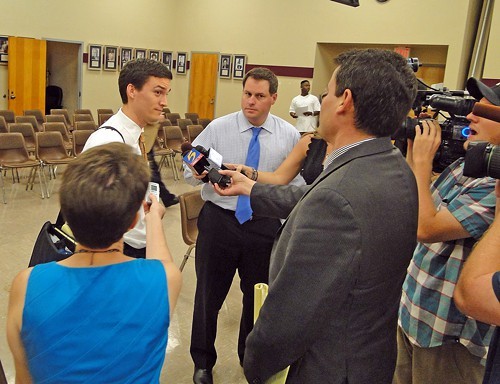