City Candidates and Their Backers Go Public in Endorsement Ceremonies

The endorsement game is on, and candidates in the October 6th City of Memphis election as well as their backers are hastening to make their choices known. Two ceremonies on the eve of Labor Day illustrated the phenomenon.

Occasion Number One was for the benefit of Memphis Mayor A C Wharton’s reelection, and it was held on Wednesday in the mayor’s Union Avenue campaign headquarters. A sizeable group of public officials who are on the line for Wharton grouped around him, and, upon being prodded by the media (specifically by Les Smith of Fox13), a few of them came forward to attest to their devotion to the mayor’s cause and the reasons for it.

Several of the statements were eloquent, perhaps the most compelling being that of state Rep. Larry Miller, who pointed out that the state legislature, never exactly a fertile field for the hopes of Memphians, had undergone a sea change in recent years — due to budget cutting, Republican domination, and a shift in political control to parts east, among other factors. Consequently, said Miller, someone with the connections, working relationships, and pronounced diplomatic skills of A C Wharton was indispensable.

The most quoted remark, though, was that of another legislator, state Rep. Johnnie Turner, who said candidly that she was for A C because “I want to be on the winning side.” A jest, of course, but one with a point.

The incumbent mayor, running for his first full term after succeeding the retired Willie Herenton in 2009, is considered to be well ahead of a small crowd of rivals, including former City Councilman Edmund Ford Sr. (running now as Ed Ford Sr., in a tandem including his son, District 6 Councilman Ed Ford Jr.) and Shelby County Commissioner James Harvey.

Certainly Wharton’s financial asssets¸reportedly well north of $250,000, far exceed anybody else’s, as do his various published lists of endorsements.

Oddly enough, though, one list on the mayor’s campaign website included the name of Councilman Ed Ford Jr. — manifestly in error and a strange oversight, given that campaign chairman Deidre Malone has already sent out an email to the media explaining that the name of Justin Ford (nephew to Ed Ford Sr. and cousin to Ed Ford Jr.) had been included on a previous list by error.

The aforesaid Ed Ford Sr. would have an endorsement moment of his own on Thursday, when he and 10 other candidates in the city election, including the aforesaid Ed Ford Jr., were formally endorsed by the AFL-CIO Council of Memphis and Shelby County.

That group had its remarks to make, too, and here and there was some passionate oratory about the perceived injustices in city government — notably 4.6 percent paycuts and reduced benefits for city employees in the most recent city budget and the looming threat of privatization of city services, especially in the Sanitation Department.

Councilman Ford Jr. said that he and Collins were about to introduce a plan that would redeem at least some of the lost pay and benefits, and Councilman Brown hurled a defy on the score of privatizing Sanitation. Interestingly, given that all the endorsements were said to be unanimous, AFL-CIO Council president Irvin Calliste made a point of rebutting one of the Council’s endorsees on a vital point.

That was Strickland, who had to leave early and was quoted in absentia by Calliste as having advised Sanitation workers to be “open-minded” about privatization. “Never!” vowed Calliste on their behalf. (Apprised of Calliste's statement, Strickland said he had never given Sanitation workers any such advice, though he acknowledged having suggested they keep an open mind about another mode of organizing Sanitation operations called "managed competition.") 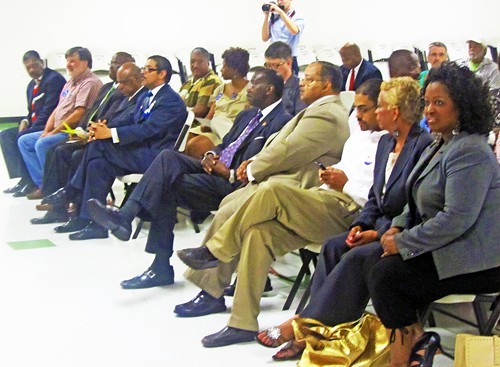