Shelby County Commissioner Terry Roland, charging that Commission Democrats "are aligning with Planned Parenthood solely as a partisan stronghold," asked Governor Bill Haslam by letter Thursday to intervene in the local dispute "because the Democrats are using this contract as a political football...." Without specifyng what kind of help was needed from Haslam, Roland said, "I am asking you to step in, assist, and offer us guidance with this matter and review the process." 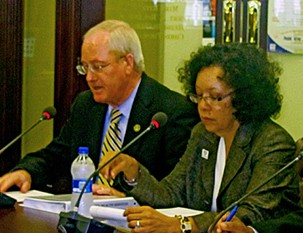 In a session Wednesday which saw opposing sides accuse each other of playing politics with a medical issue, the Hospitals and Health Committee of the Shelby County Commission voted 6-4 to defer action for three weeks on approval of Christ Community Health Center as a sub-contractor for women’s health services under Title X federal funding.

The vote was along party lines, with Democrats in the majority, and it prefigured what is certain to be a politically charged power struggle and cliff-hanger vote when the issue is revisited in committee on October 12 and in full public session for final disposition on October 17.

Christ Community Health Center had, along with Planned Parenthood Greater Memphis Region and the Memphis Health Center, answered an RFP (Request for Proposal) from the Shelby County Health Department, which under legislation passed earlier this year and subsequent state directives, is now the official contractor for such services rather than the state itself, as was the case in previous years.

A six-person panel of officials from the Health Department and county government recommended approval of the bid from Christ Community on the basis of the Center’s higher cumulative score on a checklist of previously established service-related criteria. According to Yvonne Madlock, Health Department director, the aggregate scores were: Christ Community Center, 95.33; Planned Parenthood, 88.88; Memphis Health Center, 84.54. Madlock added that all three bidders met the Department’s basic standards.

Commissioner Chris Thomas, the first of several Republicans speaking in favor of contracting with Christ Community Center, moved to accept the panel’s recommendation as a purely professional judgment and asked his colleagues to “not get political.” After several exchanges involving various commissioners, Commission chair Sidney Chism, a Democrat who made the first formal motion for deferral, issued a similar caution, charging proponents of the Christ Community contract with a “push [that] has to do with politics.”

Underlying the medical issues involved was the fact that a Tennessee state government dominated by Republicans in the governorship and both legislative chambers had publicly embarked this year on a concerted effort to freeze out Planned Parenthood from women’s health activities funded under Title X of the 1970 Public Health Service Act. For several previous decades, Planned Parenthood had performed a major portion of family planning and other services locally under contract with the state.

But Planned Parenthood is identified with abortion procedures by many of the social conservatives who loom large in the Tennessee Republican hierarchy, and, even though none of the highly diverse women’s medical services performed with Title X funds relate to abortion, the legislature attempted to exclude Planned Parenthood from direct involvement with Title X. When a flaw was discovered in the enabling legislation that nullified that intent, the state Health Department moved on its own to require county health departments to administer Title X funding and administer the program’s services.

Madlock temporized, advising the state Health Department that the Shelby County Health Department was not equipped to provide a full level of services on its own and would have to sub-contract or “partner” with one or more local agencies if it was to administer the entire local package of $1,345,000 in Title X funding. (The portion of the grant being out-sourced is $397,900.)

Hence the RFP and the creation of the six-person panel to adjudge bids. The members of that panel were Harvey Kennedy, who serves as CAO for county mayor Mark Luttrell; Kim Hackney, Luttrell’s chief policy advisor; Dr. Kenneth Robinson and Bill Powell, two other county officials; Dr. Helen Morrow of the county Health Department; and Madlock herself.

Barry Chase, director of Planned Parenthood locally, attended Wednesday’s committee session along with other Planned Parenthood staffers and supporters, and affirmed to reporters his beliefs that politics was behind the rejection of Planned Parenthood, that the panel’s criteria for selection had been unclear, and that Planned Parenthood was both better equipped to provide Title X services locally and had done so “for 30 years.” In support of the latter statements, he passed out a checklist of his own, including the claim of being able to serve some 3500 clients as against CCHC’s 2000.

When similar arguments had been put forth in committee debate by Democrats Walter Bailey, Steve Mulroy, and Melvin Burgess, Republicans Thomas and Terry Roland scoffed at these as “talking points,”. In the process they advanced some talking points of their own, one of which was that Christ Community Center had six brick-and-mortar branches and one mobile center.

The Democratic members essentially argued that more time was needed to evaluate the information used by the six-member panel to make its judgment. The Republicans basically countered that the panel had performed, in Roland’s words, “due diligence” and that waiting three weeks to approve the contract would take things beyond September 30, the last date of an existing three-month extended contract with Planned Parenthood.

The Democrats responded that Planned Parenthood would no doubt continue to provide services during the intervening period — a fact confirmed later by Chase, who said that a temporary grant to his agency of some $100,000 in Title X funds to cover the months of July, August, and September had been expended long ago and that Planned Parenthood had continued to provide services gratis.

Commissioner Heidi Shafer, who chairs the commission’s Hospital and Health Committee, noted pointedly during Wednesday’s discussion that all of the agencies that had bid for the Title X contract would necessarily be operating at a loss.