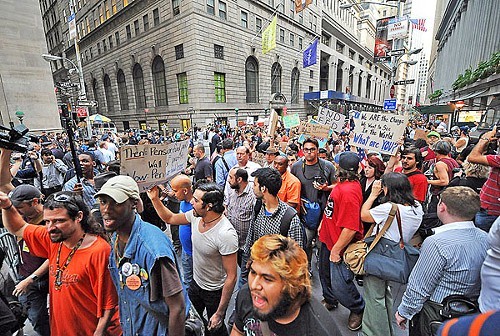 Well, it's finally happening; as the headline of my piece in February, "Gadfly: Aux Barricades, Wisconsin!", foreshadowed, the barricades are finally being stormed, and, this time not just in Madison, Wisconsin. It's beginning to look like “American Spring” may have finally arrived!

The truly grass-roots-initiated (as opposed to the Astroturfed “Tea Party”) “Occupy Wall Street” demonstration has caught on, not only in lower Manhattan, but from Portland, Maine to Honolulu, Hawaii, and many places in between, including (amazingly enough), right here in River City (and internationally as well).

Unsurprisingly, the corporate media did their best to ignore the uprising, preferring to wait for the de rigeur over-reaction of the local constabulary to cover the disobedient rabble aspects of the demonstrations. And, while the MSM's obliviousness to the events was predictable, even some of the alternative media (ahem), have ignored events that have begun to acquire a life all their own, even when those events have been happening right in their own backyard.

The media were faced with the problem of how best to discredit this rising tide of protest, and settled on suggesting that the protesters didn't even know what they were protesting about, were unfocused and had no coherent message. Strange how that criticism was never leveled at the Tea Party during the demonstrations that marked its infancy. It must be because they wore better costumes.

Better yet, many in the media decided they could dismiss the protest by caricaturing the protesters as hippies, counter-culturalists, or best of all, anarchists. The fact that many of the protestors have been young, or students, has been seen as an effective way to marginalize the protest, in toto. I mean, it's not as if students, many of whom are crushed under the burden of loans together with an eviscerated job market, have any skin in the game, right, or like many of the most effective protest movements in history were started by students.

Admittedly, the protestors on Wall Street don't have the luxury of a single-issue grievance, like the Wisconsin public unions did, and are not as easily grouped under a single banner as those union members were, but their grievances are no less well defined. Their problem (and what makes the media think they're so easily marginalized) is the sheer number of those grievances, from Wall Street's avarice and corruption to a government that is presiding over the demise of the middle class, the dangerously wide income disparity and an increase in corporate power and entitlement while rendering the peon working classes powerless and disenfranchised.

And then, of course, it makes it ever so much easier to ridicule any attempt to protest society's injustices if “Hollywood” gets involved. How dare famous people have principles, much less stand up for them! We saw that with the efforts to liberate the West Memphis Three, and it's being used, once again, with the Wall Street protests, as celebrities like Michael Moore and Susan Sarandon demonstrate their solidarity with the protestors.

I have no idea whether these protests will end up being nothing more than a flash in the pan, or will spawn the kind of push-back against the status quo that could result in meaningful reform of our entire social, economic or electoral systems. What I do know, however, is that these protests are a long overdue departure from the kind of complacency that has facilitated the takeover of our society by greedy, power-hungry corporatists, facilitated by their willing (and well-paid-for) handmaidens in the halls of government, and that can't be anything but good.

Right on, brothers and sisters!