Chattanoogans Tell School Board, Transition Committee How Unification Went Down for Them

by Jackson Baker and John Branston 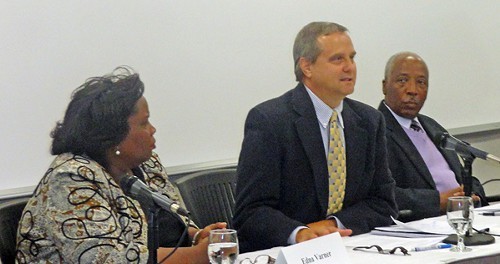 Four veterans of school consolidation in Chattanooga — two white and two black — offered some advice and good wishes Thursday evening to their counterparts in Memphis, but the inescapable conclusion is that the job is going to be much harder here.

In fact, one of the visitors — Jesse Register, the first superintendent of a unified Chattanooga/Hamilton County school system — took a dim view of the escape clause in this year’s Norris-Todd bill that allows suburban communities a shot at separate special school districts when the merger of the Memphis and Shelby County systems becomes final on September 1, 2012.

Such an outcome would be “dysfunctional…non-productive,” said Register, who has had a hand in guiding several school-merger situations and who now serves as director of the Metro Nashville school district. “You need to win people over.”

Register and three other veterans of the mid-‘90s Hamilton County merger — Jack Murrah, former president of the Lyndhurst Foundation of Chattanooga, former principal and teacher Edna Varner, and Hamilton County school board member George Ricks — came to the FedEx Technology Center at the University of Memphis to share their experience with members of the new unified Shelby County school board and the transition task force.

Michael Casserly, executive director of the Council of the Great City Schools, was facilitator for the event, the second joint meeting of the new board and transition committee. The meeting was also attended by representatives of the Hyde Family Foundation, including Pitt and Barbara Hyde, and representatives of the Bill and Melinda Gates Foundation.

In an introduction for the session, Murrah provided a background for the Chattanooga/Hamilton County school-system merger that sounded strikingly familiar in some of its particulars. The Chattanooga city system had been majority black, while the county system, which “suffered from a culture of self-satisfaction,” was majority white.
Just as has been the case in Shelby County, the prospect of merger was greeted with “a great deal of angst,” said Register.

There were as many differences between the Hamilton County situation and that of Shelby County as similarities, however. The two systems in Hamilton County were combined in 1997 after a three-year planning period, creating a merger system which today is less than one-third the size (40,000 students) and considerably more integrated (59 percent white) than the combined Memphis and Shelby County systems will be under the best of outcomes.

Another difference: In addition to allowing for special school districts in the wake of the Memphis/Shelby County school-system merger, the state legislature has created two other escape hatches — a greatly expanded charter-school system and licensing of virtual-school networks — and shows an inclination to create even more, including the imminent prospect of vouchers for private schools.

None of those prospects were serious alternatives during the Hamilton County merger, noted the Chattanooga quartet, who agreed that their situation, while challenging, possessed nowhere near the degree of difficulty confronting Memphians and Shelby Countians.

Murrah, who described himself as a converted skeptic on the process of consolidation, said the process of bringing all parties together face to face may be as important as the end product two years hence Register managed to be upbeat without sugarcoating the obstacles Hamilton County had to overcome — business apathy, suburban distrust, black flight from the city, and “sabotage.” Collectively, he called them "land mines" and said, "I stepped on a few.”

Murrah, Register, Varner, and Ricks (who described himself as a one-time militant who "learned to come to the table") served it up straight with a dose of hope. All agreed that the end result was worth the pains.
Murrah, responding to a lament from former county school board chairman David Pickler, did appear to offer some commiseration, "Ten years from now there will be people saying 'why didn't we get a vote?'" when Pickler made a point of noting that Memphians alone took the steps that got us to this point.

Reactions from the 30-odd board members and transition team members present varied from informational questions to thinly veiled spoken editorials. Ernest Chism, a veteran of 40 years in the county system, seemed skeptical. Some of the dialoguing solutions suggested by the Chattanoogans “won’t feed the bulldog,” he said, when some of the city students “don’t speak the King’s language.”

For Betty Mallott, an erstwhile member of the Memphis City Schools board now serving on the interim all-county board, the major concern was the prospect of separatism from special school districts down the line. And David Reaves, like Chism a unified board member by way of SCS, thought he detected a danger sign in what seemed to be a marginal drop in enrollment in Hamilton County from 1997 to now.

Still, the visiting Chattanoogans were encouraging and upbeat. They agreed that the unified Hamilton County system was far better than either of the two systems that created it had been, and saw the various challenges confronting Memphis and Shelby County as opportunities. “I envy you,” said Varney with apparent conviction.

All in all, the evening, from the Shelby Countians’ point of view, had been a bit like getting advice from a good friend or neighbor about how to raise difficult children. The sympathy and advice can be comforting for a moment, but the responsibility cannot be shifted or the task understated. “It’s not going to be easy,” was a cautionary last word from Shelby County Mayor Mark Luttrell, who serves on the transition committee and appointed several of its members.